Home frontpage Uganda: Museveni Hits out at ICC as he Attends Televised Debate 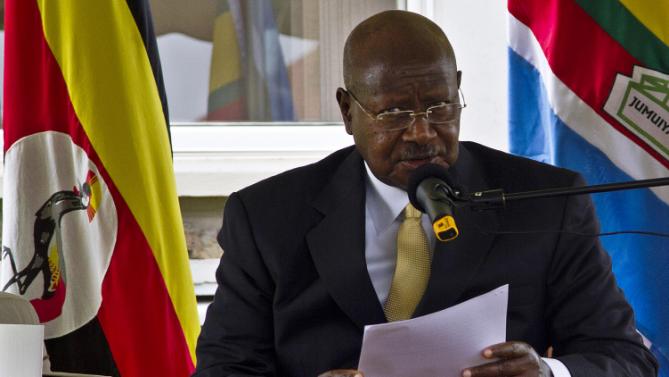 KAMPALA (HAN) February 15, 2016 – Public Diplomacy and Regional Stability Initiatives News. Uganda’s veteran ruler Yoweri Museveni, who is standing for re-election on Thursday, has said he is in favour of his country pulling out of the “partisan” International Criminal Court based in The Hague.

Museveni, who came to power in 1986, made the remarks during a televised debate late on Saturday — his first ever with his presidential challengers.

“The ICC is not serious, it is partisan, it is not balanced, it is not very serious,” he said, referring to The Hague based court set up in 2002 as the last resort to try war criminals and perpetrators of genocide never tried at home.

Many in Africa have railed against the court as being biased and targeting Africans with some leaders on the continent accusing it of acting as the judicial arm of foreign powers.

“For instance, there are so many leaders who should have been tried but because it (the ICC) is not serious they have not tried them. So we have lost interest in ICC,” Mr Museveni said.

During the debate, at exactly 6:50 pm East African time Mr Museveni filed in at Serena Hotel Kampala, dispelling doubts that he would once again disappoint Ugandans who had expected to see him at the January 15 Presidential Debate.

It was a momentous march to the red carpet as Ugandans prepared for a showdown at the highly billed Presidential Debate.

Clad in a black suit, with a yellow tie, Mr Museveni and his handlers trooped to the red carpet in a show of triumph.

In his right hand, the President carried a yellow file as if in testimony of how he was prepared for the debate.

About 25 minutes after the entry of President Museveni, Kizza Besigye made a grand entry waving to the cheering crowd with his trademark V sign.

In tow was Winnie Byanyima whose absence in Dr Besigye’s 2016 campaigns has raised questions from supporters and critics alike.

Byanyima’s presence at the debate is likely to be a subject of discussion to the days leading and after elections.

The president overruled his advisers who asked him not to attend the debate after skipping the inaugural one on January 15, 2016 and later deriding the televised discourse as a High School equivalent.

“He said ‘get me my diary’ and wrote that ‘I Yoweri Museveni will attend the debate on January 13’,” one handler said adding they were disarmed and remained clueless and cold after they had publicly vaunted that the debate was useless.

Museveni made other demands, among them, that senior Voice of America editor and host of the broadcaster’s flagship Straight Talk Africa talk show host, Dr Shaka Ssali, whom the president considers is sympathetic to Uganda’s Opposition, should not ask him questions.

It played out in public glare, with Dr Ssali, a respected Ugandan journalism export who has interviewed several presidents, reduced to questioning mainly fringe presidential candidates in what should have been a make-or-break televised debate.

The only time he directly addressed Mr Museveni was the all-candidates’ question on their most important and most regrettable decisions in public life, after a tacit one about an individual who treats citizens as “subjects” and says “my oil” — euphemism for Museveni — was lost in uncritical response from Independents Prof Venansius Baryamureeba and Maj Gen Benon Biraaro.

Gen Biraaro, like Dr Bwanika, exuded the same sureness that saw them shine during the inaugural debate.

In the press conference conducted shortly after his arrival, Dr Besigye reiterated his commitment to dislodge President Museveni, whose regime he continues to call a ‘dictatorship’