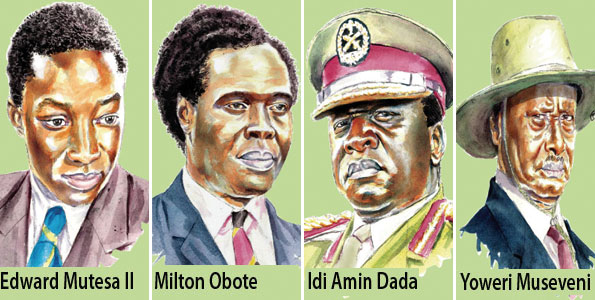 KAMPALA (HAN) February 13, 2016 – Public Diplomacy and Regional Stability Initiatives News. Uganda, which won independence from Britain in 1962, has a long history of dictatorial rule and violence.

For the past three decades it has been under the strong-arm rule of President Yoweri Museveni, who hopes to be re-elected for a fifth term on February 18.

October 9, 1962: Uganda gains independence after being a British protectorate since 1894, with Milton Obote serving as prime minister and Edward Mutesa, king of Buganda, as head of state. A year later, the constitutional monarchy is replaced by a republic, and Mutesa is named ceremonial president.

April 15, 1966: Obote deposes Mutesa and declares himself president, and a year later a constitutional change gives him almost all powers. Socialist-inspired Obote rules with an iron fist.

January 25, 1971: General Idi Amin, head of the army, seizes power while Obote is away.

Amin’s eight-year reign is particularly brutal, with between 300,000-500,000 people killed. He also expels some 60,000 foreigners, mainly Indians and Pakistanis.

A vicious guerrilla war lasts until 1985, leaving 300,000 people dead. The guerrillas are led by Yoweri Museveni.

In 1988, the Lord’s Resistance Army (LRA) led by Joseph Kony emerges as a rebel group.

May 9, 1996: Museveni wins the first direct presidential election. He is re-elected in March 2001.

In 2005, a constitutional amendment allows him to run again as often as he likes. Museveni wins two more elections in 2006 and 2011, polls rejected by opposition leader Kizza Besigye.

1998-2003: Uganda joins the regional war in Democratic Republic of Congo. Ugandan soldiers fought with their Rwandan allies and were charged by the International Court of Justice with looting Congo’s resources.

The LRA is accused of killing more than 100,000 people and kidnapping more than 60,000 children, starting in northern Uganda.