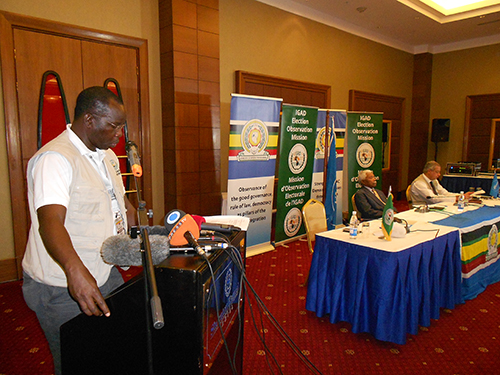 1. This is a Preliminary Report of the IGAD Election Observer Mission to the 2016 Presidential and Parliamentary Elections in Uganda and covers the Mission’s findings from the date of arrival of the advance Observer team up until the closing and counting processes on 18th February, 2016.

3. IGAD is a regional body with membership of Djibouti, Eritrea, Ethiopia, Kenya, Somalia, South Sudan, the Sudan and Uganda. The organization’s mandate includes promotion of Democracy, Good Governance, conduct of Free and Fair elections as some of the main objectives contributing to the enhancement of peace, stability and security in the region.

4. The IGAD Election Observation Mission to the Presidential and Parliamentary Elections in the Republic of Uganda was a lean team composed of 10 participants from the Secretariat. The Election Observer Mission was led by Mr. Yufnalis Okubo, Ag. Director of IGAD Conflict Early Warning and Response Mechanism (CEWARN). The main Observer Mission team arrived in Kampala on 14th February 2016.