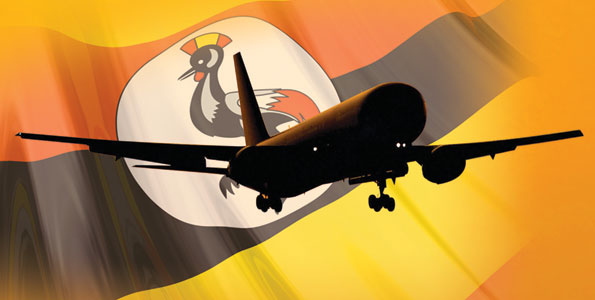 By RAYMOND TAMALE: Uganda is determined to have its national carrier flying again in 2017. Government officials have set August as the month Uganda Airlines will flap its wings again after more than 16 years of being rendered inoperable and in some kind of “abeyance”

The EastAfrican has learnt that negotiations with Canadian aircraft manufacturer Bombardier and France’s Airbus for lease of planes to make the initial fleet are in advanced stages.

“Reviving the national carrier is a process, so we must move carefully and follow every step properly, but I can assure you, a decision was made and our plans are now in advanced stages. Uganda Airlines will be flying again next year,” Works and Transport State Minister Aggrey Bagiire said on Thursday.

Sources privy to the planning say the government will initially lease at least six aircraft, four for short-haul regional flights and two for long-haul.

Regional carriers, particularly Kenya Airways which has for the past 15 years operated Entebbe like a domestic hub, are likely to suffer loss of revenue as Uganda seeks to claw back regional routes to kick-start an ambitious global outreach.

Others likely to be affected are RwandAir, Ethiopian Airlines and South African Airlines.

“We are going through the protocols, processes and now a Cabinet paper has been developed. Once Cabinet adopts it, the paper will be presented to Parliament for approval and financial appropriation. We intend to lease and start (flying) once people know that we are flying again, then in a period of about two years, we shall purchase our own aircraft,” Mr Bagiire said.

He added that leasing was cheap, but only in the short-run. “It becomes expensive in the long-run, but to start us off, that is the easier option.”

Captain Francis Babu, an aviation expert says there are two types of leases which Uganda can look at: Outright purchase and lease purchase. “In this case I would suggest a lease purchase because it’s affordable.”

“Lease purchase requires between Ush200 to 300 million ($56,000 to $84,000) and there is an option of changing the fleet every after three or five years, which I’m certain Uganda can afford at the moment,” he added.

But Captain Mike Mukula says though lease is convenient in the short term, it becomes expensive long-term. He added that leasing should only be used as a stop-gap measure while a more lasting solution is found.

“We have gone to Airbus and Boeing; we are going to all of them so as to prepare and also budget accordingly,” said Mr Bagiire.

But a knowledgeable source said Bombardier’s CRG 900 Generation Next, fitted with modern amenities like on-board Wi-Fi and the Airbus A320/200 are early favourites, with the Boeing 737 Generation Next being considered later.

The government is in the first quarter of next year expected to announce a launch team of experts and a board for the national career, which will be charged with establishing a management team.

“We want to ensure that politics is totally out, I want to travel Uganda Airlines not as a minister but like you a journalist,” Mr Bagiire said.

The revival of Uganda Airlines is likely to trigger competition among airports. Kigali and Jomo Kenyatta International Airports have been working to control the region’s air travel by expanding and improving facilities.

During this year’s 54th independence celebrations held in Luuka district, President Yoweri Museveni said the government allowed the airline to close because it was making losses and by that time Ugandans were not travelling as is the case now.

“I have learnt that Ugandans are now spending $420 million per year on travel. That’s why we decided to revive the airline so as to stop the outflow of this money,” he said.

Yet in taking to the skies at this time, Uganda Airlines, which last flew in 2001, joins a globally struggling industry, and the government is yet to present a concrete business case.

Between 2001 and now, a number of privately owned airlines attempted to fill the void left by Uganda Airlines, but all failed and were out of the skies less than two years after starting operations, except Air Uganda, which operated for seven years until it was grounded in 2014.

Air Uganda, whose death knell was sounded when Civil Aviation Authority failed a routine International Civil Aviation Organisation audit in June 2014, was also a victim of intrigue, as powerful officials within government were opposed to the idea of a foreign-owned airline taking the place of the national carrier. At the time of its grounding, Air Uganda was the de facto national carrier, operating out of Entebbe.

Uganda is not alone among countries without national carriers. Other countries like Ghana, Nigeria and Zambia pulled their airlines out of their skies after years of loss making and dependence on government subsidies.

The airline which was established in 1976 by former president Idi Amin with a fleet of 15 aircraft flying to destinations within Africa and Europe is yet be seen if it will surpass the recent wave of airlines in the region that are choking on debt, in a market where the aviation business has become more competitive.

According to a June report of the International Air Transport Association (IATA), African airlines were to post a $500 million loss by the end of 2016, a minor improvement on the $700 million that the region’s carriers registered in 2015.

Mid this year, Kenya Airways announced a Ksh26 billion ($252 million) loss, which was partly attributed to collusion of the employees and suppliers to defraud the airline by inflating ticket and fuel prices, an audit of the carrier revealed, raising questions on whether the non-profitability of the industry was commercial or sheer corruption.

Either way, Uganda’s checkered history of corruption does not comfort those who make the business case for the national carrier.

The audit report which came out in September showed that Kenya Airways issued over seven million seats between 2012 and 2015 at below price resulting in a $611.6 million loss, fuel prices were inflated where the airline bought fuel at higher prices than other airlines in the region specifically compared with what Africa airlines association had negotiated for its members leading to loss of $32.9 million between the period of 2012-2015.

“Most times why we face these graft cases it’s because the president tends to give these big jobs to carders in a way of rewarding them which in most cases are less qualified who mess up in fear of employing experts meant for job”.

“So long as no agency in Uganda is independent in its operations the fight against corruption in all these government entities is still far until we zero it down to individuals that can be held responsible,” said Cissy Kagaba, a civil society activist.

Currently Uganda is earning $800 million or Ush2 trillion annually from the tourism sector and advocates for revival of a national carrier, arguing these numbers can be enhanced.