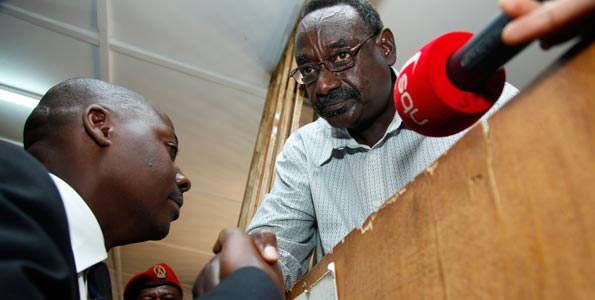 KAMPALA (HAN) February 3, 2016 – Public Diplomacy and Regional Stability Initiatives News. Former Ugandan intelligence chief and outspoken critic of President Yoweri Museveni has been charged and remanded in Luzira prison in Kampala’s suburb as tensions mount ahead of a presidential poll this month.

However, he denied all the charges before being remanded to Luzira prison until February 9 when he will return to court.

In the first count, court chaired by Maj Gen Levi Karuhanga heard that Gen Sejusa in April 2013 while a representative of Uganda People’s Defence Forces (UPDF) in parliament was given permission of absence for three weeks but upon expiry of the said leave, he did not return to the August House.

Gen Sejusa’s lawyers put up a spirited fight, contesting the charge saying their client cannot be tried on service offences yet he has a pending case in the High Court- Civil Division on whether he is still a serving army officer or not.

Gen Sejusa fled the country in April 2013 after he alleged, in a letter, that there was a plot to eliminate top government officials opposed to the “Muhoozi project”.

Brig Muhoozi Kainerugaba, the commander of the Special Forces Command, is son of President Museveni.

In his first statement to court before the commencement of his trial, Gen Sejusa did not object to being tried by four captains. The panel hearing his case features two captains, lieutenant, major and is chaired by Major General Levi Karuhanga.

Gen Sejusa, who is the first UPDF four star general to be tried in the military court on Monday cut a defiant posture, saying he does not care about being charged before the army court in relation to the ‘defiance campaigns’ and his calls for vote protection mechanism, saying such schemes are within the ambit of the Constitution.

Speaking through his lawyer Ladislaus Rwakafuuzi, the controversial general argued there is nothing illegal about his actions and says that “only a free and fair election can calm tensions in the country”.

“General Sejusa says he finds the complaint by the State ridiculous because there is nothing illegal about [his actions],” Mr Rwakafuzi said in an interview, after the two had a meeting at Makindye military barracks where the general had been incarcerated.