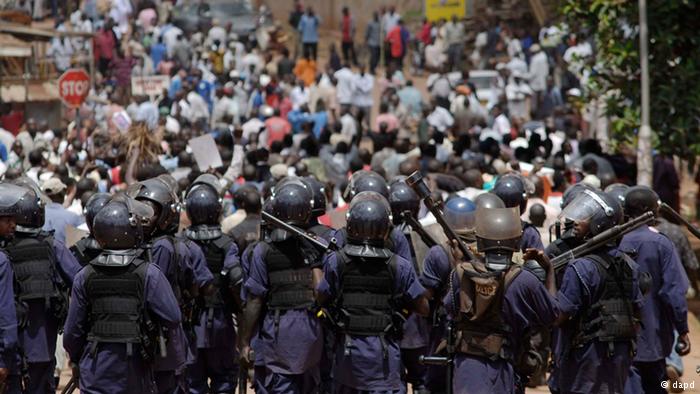 KAMPALA (HAN) February 5, 2016 – Public Diplomacy and Regional Stability Initiatives News. With barely two weeks till the presidential election in Uganda, civil society groups are concerned that the poll might be marred by violence. They are now campaigning for peace ahead of election day on February 18, 2016.

A local NGO, the Human Rights Network-Uganda (HRINET-U) has issued a report citing cases of members from opposition parties who have gone missing, while others who have been arrested have not been charged or been brought before the courts.

The report also says security organizations are believed to be favoring incumbent president Museveni. It sites incidents when Uganda’s main opposition leader and flag bearer of the Forum for Democratic Change (FDC), Kizza Besigye, was twice stopped by police on his way to a campaign rally in the Kabale district of south western Uganda. The reason the police gave, was that Besigye intended to disrupt business at a market on his way to his campaign venue.

Such incidents have raised concerns whether the electoral process will be free and fair. According to one of the authors of the report, Patrick Tumwine, the majority of the arrested political activists are from upcountry. “There have been continued arrests of different actors in the country who are associated with different political groups,” he said. Some have been charged, while others have been detained for over 48 hours in contradiction to the law.

Solome Nakawesi, a coordinator of candidate Amama Mbabazi’s Go Forward camp, said they have reported numerous cases of rights abuses to the police but no action has been taken.”We have up to 13 people that are missing in Kampala and Rukungiri districts, including a bishop who has been detained but has not been arraigned in court,” Nakawesi said.

“We have raised all these cases with the electoral commission and the police but we are disappointed that there is not so much expediency in ensuring that these issues are resolved,” she added.

In the wake of all these security concerns, rights activists have launched the Peace Must Prevail campaign in an effort to discourage people who might want to riot if the final result does not go their way.

This move by the activists follows the never-ending battles between the police and the opposition, according to DW’s correspondent in Kampala, Alex Gitta. On several occasions live ammunition and teargas canisters have been used to quell riots.

Margaret Sekagya from the Human Rights Centre that is part of this campaign urged civilians to remain peaceful. “At this critical juncture, we know that if we fail to stem or avert the tide of election violence, it would be an act of conscious irresponsibility on the part of all leaders and citizens of Uganda,” she said. Presidential candidates and the government have been asked to play a bigger role in discouraging their supporters from participating in violent activities.

“We urge all candidates to condemn this violence and not to point accusing fingers but to create avenues of dialogue,” Sekagya said.

However, the police said that they are aware of some political camps recruiting militia groups to cause violence. They say the groups often pretend to be protecting their candidadates. Police Chief Kale Kayihura insists it is police’s work to maintain law and order. “Incidentally we are protecting all the candidates, we are policing all the rallies and most of them have been peaceful,” Kayihura said. This week the police imported several new anti-riot vehicles and other equipment to be used during the election period.