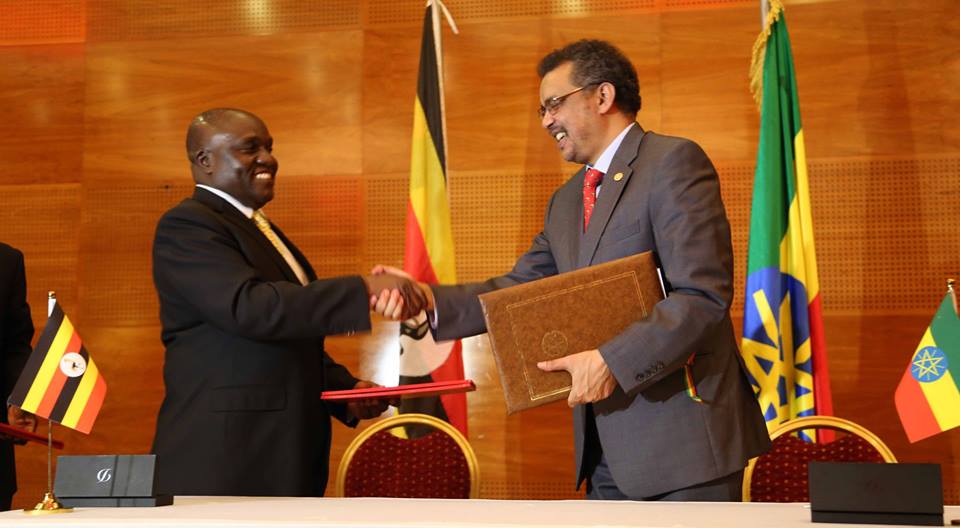 Addis Ababa (HAN) July 7, 2015 – Public Diplomacy and Regional Investment News -‎Ethiopia and ‪Uganda Joint Ministerial Commission ended with a signing of three Memorandum of Understanding in the areas of Education, Agriculture, Tourism and cultural Heritage. In a press conference that followed the signing of the Memorandum of Understanding, Ethiopian Foreign minister,  Dr.Tedros  said “We have signed a number of agreements in different areas of cooperation and these additional agreements would help us to deepen the longstanding bilateral relations of the two sides in different areas.”

He added “Our two countries have longstanding sisterly relations and have enjoyed peacefully coexistence throughout our history. The peoples of the two countries share the same culture, languages, and belong to one river basin, the Nile, ” he added.

He further noted Ethiopia and Uganda have been playing a vital to bring peace and stability in Somalia and South Sudan within the framework of Intergovernmental Authority on Development (IGAD).

“The exemplary relations between our two countries will help us to explore new avenues of cooperation and allow us to further expand out long and historic friendship and solidarity,” he said
Uganda’s Minister of Defense, Crispus Kiyonga, for his part said his country deeply values the strong diplomatic relationship with Ethiopia.

The two countries are also working to ensure peace and security in the region on top of augumenting their economic cooperation, he said.

According to Kiyonga, Uganda remains committed and will continue its efforts to work with Ethiopia towards bringing lasting peace and stability in Somalia and South Sudan.