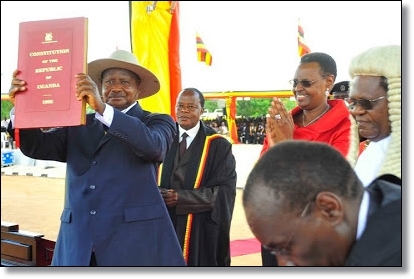 However the reality on the ground, even two decades later, is an entirely different story, according to a report presented on Tuesday at a World Bank Conference on Land Rights and Poverty.

A yawning gap exists between official legal frameworks to protect property rights and their implementation and cultural acceptance on a practical level in Uganda, where some 80 percent of the population holds land under customary tenure without formal recognition, said researcher Francis Birungi.

“There is a great disparity between the protection enshrined by the law and women’s lives and experiences, and land security for millions of women and their children remains tenuous,” he said.

According to Birungi’s research project, led by Uganda Community Based Association for Women and Children’s Welfare (UCOBAC), land is by far the most productive asset in the country.

Agriculture accounts for 43 percent of gross domestic product, 80 percent of employment and 85 percent of export earnings, he said.

“Women represent 80 percent of the agricultural labour force and are the backbone of Uganda’s economy, producing up to 60 percent of cash crops and 80 percent of food crops,” Birungi said.

“However even the strongest legal foundations often do little to help women if they are not communicated well or do not reach women in affordable and systematic ways.”

He described the experience of a 65-year-old widow in northern Uganda who struggled to defend her right to a piece of land that her late husband had inherited. She lived peacefully on the land until her brother-in-law’s son decided he wanted it for himself.

“She had nothing legally binding to prove that she had a right to stay on the land, leaving her completely exposed to the whim of her late husband’s nephew,” he said.

“She attempted to negotiate terms for sharing the land with him, but to no end.”

She sought redress from the local council and clan leaders who intervened, but the situation remains unresolved because she has no proof of ownership, he said.

It is, however, before a court – though the woman had almost given up because she could not afford the transportation costs of getting to court, he said.

Ethiopia, too, is a nation where the equal rights of women in marriage and property ownership are enshrined in law but not in practice, said Negasa Derassa Sima of the Responsible & Innovative Land Administration (REILA) Project.

Structural and socio-cultural factors prevent women from realizing the land rights conferred on them by customary or formal laws, and many women are not aware of their rights to land – rights that are typically controlled by men, he said.

While national law is codified, Islamic law is not, leading to “inconsistent and discriminatory decisions” in settling disputes, especially those filed by women, he said.

Moreover, if a women claims a right to land, this can result in household conflict, and the loss of support from her family are social and economic costs she may be unwilling or unable to bear, he said.

“Even when women are prepared to assert those rights … they often lack the financial or educational resources to exercise their rights through, for example, a court of law,” he said,”and they face barriers in travelling to those institutions or are intimidated, given their under-representation in the courts or customary dispute-resolution bodies.”