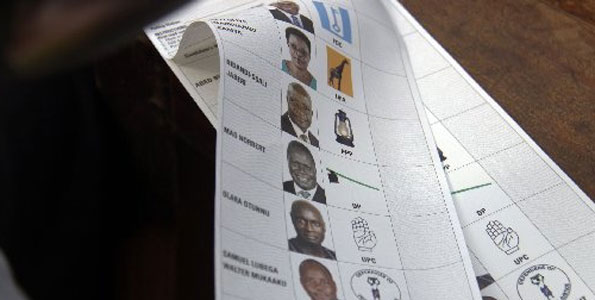 KAMPALA (HAN) February 6, 2016 – Public Diplomacy and Regional Stability Initiatives News. Uganda’s Electoral Commission says it has received close to 16 million ballot papers for the presidential and parliamentary elections, putting to rest claims by the public that it was not aware of or was hiding the exact number in its possession.

A day after the ballot papers were delivered, EC chairperson Badru Kiggundu told a meeting of Ugandan lawyers that he did not know the exact number of ballot papers, which raised questions about whether he was even in charge of the electoral process.

“The Electoral Commission received the ballot papers in the specified quantities and qualities. For avoidance of doubt, a total of 15,987,800 ballot papers were delivered for presidential elections,” said Mr Kiggundu.

The number of printed papers is slightly higher than the 15.3 million registered voters, but EC explained that the excess is to cater for spoilt ballots for which a person can request for another. The spoilt ballots are not discarded, but are also accounted for. The presidential ballot papers were printed in South Africa and delivered on January 28.

Excess ballot papers are an issue in Uganda, especially in view of findings of ballot stuffing by the Supreme Court in 2006. Activists say that excess ballots could be used for the same purposes.

Ballot stuffing also saw the EC chairperson in the same year cancel results from over 30 polling stations saying they were not intelligible. Many of them shared above 100 per cent voter turnout, meaning that some people voted more than once or were given pre-ticked ballot papers to simply insert in the ballot boxes. For example a polling station, of 2,000 ended up with 2005 ballots cast.

The ballot stuffing case saw the EC introduce transparent plastic ballot boxes with seals in 2011, which was to help avoid further tampering with the cast votes inside the sealed boxes.