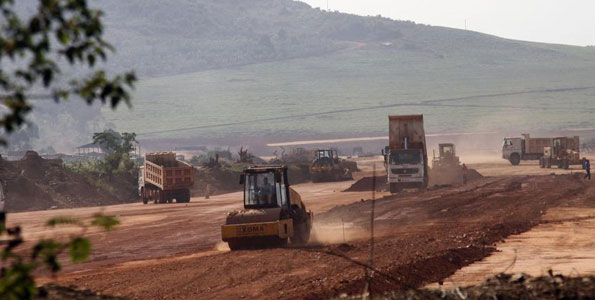 KAMPALA (HAN) January 5, 2016 – Public Diplomacy and Regional Stability Initiatives News. Uganda’s finance ministry has lowered the country’s 2015/2016 (July-June) economic growth forecast to 5 per cent from a previous projection of 5.8 per cent, citing the impact of higher lending rates. In a budget policy paper seen by Reuters on Tuesday, the ministry also forecast growth would climb back to 5.8 per cent in 2016/2017.

Last year, the central bank raised its benchmark policy rate several times, to try to stem inflationary pressures partly triggered by a weak shilling. The central bank and the International Monetary Fund have also lowered their 2015/2016 growth projections citing sluggish private sector credit growth. “Growth is expected to remain at 5.0 per cent in fiscal year 2015/16, constrained by the higher commercial bank rates,” the ministry said in the paper.

The rate of economic expansion, it said, was expected “to pick up to 5.8 per cent in fiscal year 2016/17, mainly driven by a scale up in public infrastructure spending and a rebound in private sector activity.” Uganda is at various stages of implementing a range of energy and transportation infrastructure projects, including two hydro power dams, express highways and a railway project.

The two hydro power dams are key pieces of the government plan to drive up the country’s generation capacity to 1500 megawatts from the current 850 megawatts over the next three years to make electricity cheaper and more accessible. Plans are also underway to develop a refinery to process the country’s crude oil reserves, estimated by government geologists at 6.5 billion barrels.

To finance the infrastructure projects, Uganda would increase its concessional borrowing in 2016/2017 to $908 million, from $720 million in the current year. Although traditionally Uganda has been borrowing from the World Bank and European development agencies, lately it has been increasingly turning to China whose credit, officials say, is cheaper and unconditional.