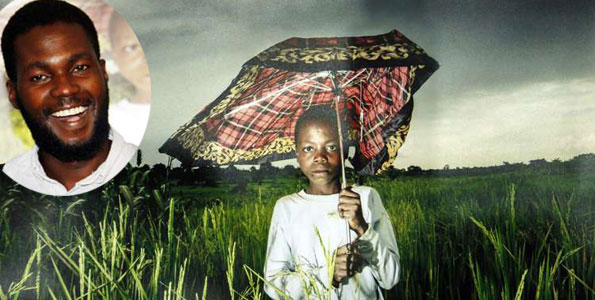 A photograph by Siraj Muyingo of a child sheltering from a drizzle under a faulty umbrella while working in a rice field as a scarecrow to keep off birds has won the photo of the year at the 2016 Uganda Press Photo Award.

Muyingo’s coloured photograph titled Sheltered, which also won the portrait category is an image of Zephaniah, a 12-year old boy working at the family farm in Butaleja district in eastern Uganda. Scaring off birds at farms is a full time job for many children in this region and it denies them a chance to attend school.

“Winning this award means a lot to me because I wasn’t expecting to win,” Muyingo told The EastAfrican.

Muyingo’s image was selected from a shortlist of 24 finalists across seven categories (daily life, portrait, creative, sport, nature and story and an overall winner of the competition or photo of the year) by an international jury of expert photographers, photo editors and curators.

The winners were announced at an award-giving ceremony held at the Uganda National Museum on November 10. The winners’ exhibition was unveiled at the same function and is now open to the public, free of charge, and will run to December 10.

A member of the jury, Frederick Noy, describes Muyingo’s portrait as one that catches the soul of the subject and also tells a whole story, describing a situation of rural life, and the suspense and anxiety of a coming storm.

He said; “For a photographer, going beyond the borders in this way, means it’s powerful and to us it deserved the overall prize.”

Martin Jjumba won the News category for his picture Rare Friends of a man being helped by a policeman after being shot with a teargas canister during a Forum for Democratic Change demonstration in Wandegeya, Kampala.

“We got many news photos on the presidential election but this one of Jjumba Martin was the only one to show such an unexpected moment…“A moment that goes against the trend of what a news agency would expect as far as documenting police action in elections time is concerned,” said one of the jury.

The Daily Life award went to Mohsen Taha for his black and white image tilted Ghost Town, showing a mother peeling matooke with her daughter while the son looks after the goats at their home in Jinja district in eastern Uganda. The Sport category was won by John Batanudde for his photograph titled Motorcross.