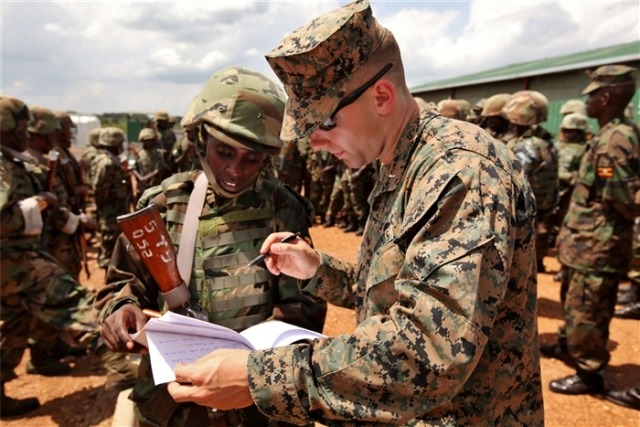 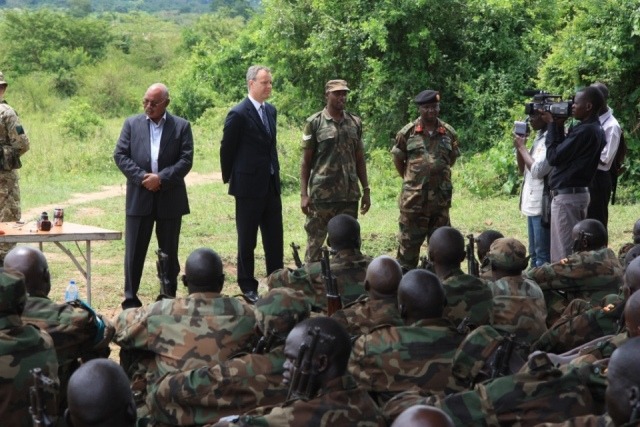 Today, Thursday, a new Ugandan elite force will start arriving in Mogadishu to protect UN personnel, including Nicolas Kay and Critical installations in Somalia. The Ugandan force, dubbed the UN special security Guard Unit, was flagged off by the deputy Chief of Defence Forces, Lt. Gen. Charles Angina, at the peace operations support centre in Singo in Nakaseke district, after undergoing a two months training.

Comprised of 410 UPDF soldiers, the force is the first of its kind to be deployed under UN in the war ravaged horn of Africa nation. UN has similar guard units in Libya and Central African Republic.

Uganda’s military chiefs said there were high expectations in the UN circles in Mogadishu and among the Somali population about the new force Uganda has constituted to facilitate peace keeping operations in the country.

The force, the military chiefs said, will free the African Union Mission in Somalia (AMISOM) troops from guard duties and concentrate on pursuing the al Shabaab militants.

Uganda is among African countries that have troops under auspices of the African Union in Somalia to enforce peace in the country that did not have a functional government for twenty years.

A Federal Government of Somalia backed by UN and AU was established in 2012, following the end of the interim mandate of the Transitional Federal Government. But the beleaguered government still faces threats from al Shabaab that is linked to al-Qaida terrorist organization.

Angina engaged the force in singing to gauge their morale and preparedness for the deployment before he delivered his speech. “I have no doubt that your morale is high. You are really ready for the task,” he said.

The deployment of UPDF soldiers under auspices of the UN, Angina said, was a historic development in the history of the Uganda’s army.

He cautioned the force against breaking their rules of engagement saying “No abating of crime will be tolerated in the mission area. If you want to break them, do it now so you can remain,”

Angina also advised the troops against reckless spending of the salaries and allowances while in the mission area. Each soldier will be paid $1028 per month by UN minus allowances.

Angina handed over a Ugandan flag to the Unit’s commander, Lt. Col. Keita Wycliffe as a sign that he (Keita) had taken responsibility of the force in Somalia.

Keita was the commanding officer of the infantry battalion in the Special Forces Command before he undertook a one year European Union funded peace keeping mission training in preparation for his new assignment.

Uganda’s military advisor to the UN, Maj. Gen. Silver Kayemba said “We got a request for this force from UN in February and in less than two months we are ready to deploy. This means we are ready to maintain peace in the region,”

The UN, Kayemba said, has already dispatched the equipment for the force in the mission area. “We are sending a force we vetted and anyone who messes up will be dealt with. We (Uganda) needs to increase her visibility in the UN,” he added.

The land forces chief of staff, Brig. Leo Kyanda said, the force’s tasks would also include; carrying out cordon and search, patrolling, providing reinforcement and relief services, command management, evacuation and joint operations among others.

“We take this new assignment under the UN seriously. Uganda’s contribution to UN peace keeping efforts in Somalia cannot be underestimated because UPDF has participated in the most complex operations,” Kyanda said.

The defence spokesperson, Lt. Col. Paddy Ankunda said, the deployment of the UN Guard Unit was an international achievement.