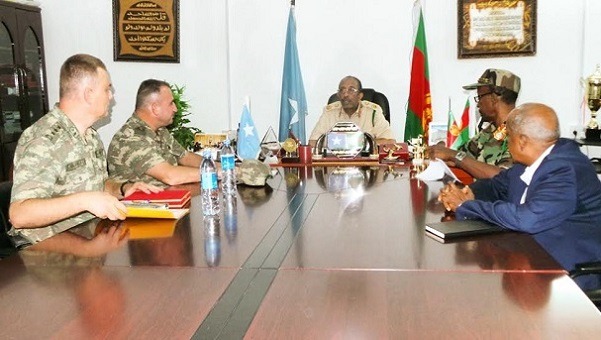 The international and geopolitical dimensions of the ongoing Somali crisis are all too often given short shrift by policymakers and outside observers alike. In the global public consciousness, the various internal factors that contribute to instability in the Republic of Somalia — be they the baleful legacy of colonialism, the ravages of internecine conflict, regional fragmentation, political squabbling, the coffer-draining prodigality of government corruption— are more or less readily understood.

Yet the external factors that have contributed in equal measure to the present emergency are perhaps less easily grasped. This is a deficiency, which urgently requires correction.

The global nature of the fight against Al Shabaab and motivations of regional actors present a dangerous threat to the sovereignty of Somalia and global security both the near term and long term.

In this paper, the authors will share their views on how the mandate of the African Union Mission to Somalia (AMISOM), a peacekeeping mission in Somalia operated by the African Union with the official approval of the United Nations is subverted by the national interests of certain regional actors. The authors by no means object to the underlying premise of African Union or UN peacekeeping efforts in Somalia, on the contrary they bear huge respect and gratitude primarily for those who paid the ultimate sacrifice while helping Somalia and Somalis. However, due to the continuous changes on the ground and the correlated needed responses, the entire role of AMISOM and its mandate comes under scrutiny with a clear prerequisite for a call for its immediate review.

Over the last half-century, a set of peacekeeping principles has been established through the painstaking work of the United Nations and various other multinational institutions, as well as policymakers, jurists, and scholars. Simply put, peacekeeping missions are expected to adhere to three core principles: consent of the parties to the establishment of the peacekeeping mission, strict impartiality of the mission in terms of composition and nature of operations, and non-use of force except in self-defense. The AMISOM mission, to greater or lesser degrees, comes up short in all these areas.

While it is true that AMISOM operates with the consent of the Transitional Somali Federal government, one cannot speak of authentic consent when with respect to a government whose sovereignty and decision-making is so hampered by logistical challenges and corruption. Without robust executive, legislative and judicial branches and an informed civil society, it is nearly impossible for Somalia to effectively lobby on its own behalf in fashioning the mandate in a way that will lead to a stable future for Somalia.

A consensus based on the primary aim of avoiding AMISOM’s sudden withdrawal or UN/EU financial cuts equates to a coercion that has and still eroding the sovereignty and the independence of Somali Republic.

As such the nature of the AMISOM intervention has made it clear that the Federal Government of Somalia lacks the ability, to borrow an autonomous legal concept, to make decisions that satisfy the elements of informed consent.

In relation to the core principle of ‘strict impartiality’ AMISOM’s aims, roles and performance show excess in self-regarding interests. Kenyan forces responsible for AMISOM’s Sector 2, comprised of the Lower Jubba and parts of Gedo regions that are bordering Kenya. Ethiopian forces operate in the border regions of Bay, Bakol, Gedo, Hiiraan, and Galgaduud all neighbouring Ethiopia.

Mikael Eriksson stated that, “clear empirical evidence that both Kenya and Ethiopia are trying to create buffer zones, and to increase their own influence over various regions of Somalia at Mogadishu’s expense,” the mind fairly reels at the notion that peacekeeping efforts are pursuing divergent and often deeply disturbing external agendas. How can a state like Kenya — which is seeking to establish a buffer zone inside Somalia, in turn creating tensions among Somali groups— possibly be charged with keeping the Somali peace?

Furthermore, as confirmed by Ltd. Abdurahman Abdi Dhimbil, the Commander of AMISOM Sector 4, Ethiopian military forces operating in Central Somalia’s Hiiraan region are not actually part of AMISOM. Similarly, an AU investigation team confirmed that Ethiopian troops in Somalia do not operate under the AMISOM command. Would it be then valid to question the Ethiopian’s real motive of joining AMISOM ‘peace keeping’ operation?

With Kenya and Ethiopia forging a defense pact aiming to weaken Somalia can they be trusted to act within the internationally agreed principle of ‘strict impartiality’? At its current settings
AMISOM is many miles away from the concept, so rooted in international public consciousness, of noble blue-helmeted peacekeepers interposing themselves between feuding parties in the interests of global peace and repose.

Nevertheless, AMISOM forces have all gone well beyond the peacekeeping mandate to the point of threatening international peace and security in the region. Back in 2008, Ethiopian forces were accused by Amnesty International and other groups of committing grisly atrocities including summary executions en-mass, gang-rape, and other forms of torture, atrocities that continue to this day. Ironically, and to point out how the AMISOM mandate has been hijacked by frontline states, the same Ethiopian General who was responsible for the above cited atrocities, including the killing of over 20,000 Somali civilians, is currently managing the state formation processes and settling disputes throughout Somalia under the auspices of IGAD.

The African Union recently apologized after admitting that Ugandan peacekeepers “separated the men from the women and shot the six adult men” at a Somali wedding. Allegations of sexual violence have become a horrible reality in a very conservative society. An internal investigation on the Sexual Abuses & Exploitation by AMISOM personnel accepts responsibilities for certain incidents.

In their own countries, the Kenyan and Ethiopian, regimes have shown an increased willingness to use violence, imprisonment, muzzling of the press to crack down on domestic critics and opponents. Are these the forces best situated to come to grips with an international terrorist group while simultaneously helping rebuild shattered political, economic, and social infrastructure in Somalia? The answer simply cannot be made in the affirmative.

Theoreticians of international conflict management have increasingly come to the conclusion that conflicts can only be resolved when the moment is ripe, which typically involves a “hurting stalemate” in which parties can no longer perceive any gain to be made. When parties perceive that material profit and territorial gains remain for the taking, there is little motivation to undertake the efforts required to build a lasting peace. Somalis are now mainly united in their conclusion that Al Shabaab can only be defeated by a Somali national army. There is also evidence that the presence of frontline states, whether as part of AMISOM or illegally, only hands Al Shabaab a tool to recruit using patriotic slogans. In order to dispose of the current paradigm, which only empowers anarchy in Somalia and sustains the growth of Al Shabaab, authors submit the following recommendations.

1. The AMISOM mandate must be re-negotiated while replacement troops are sought out, with Somali negotiators who are willing to undertake the efforts necessary to ensure that their country’s borders and their citizens’ human rights are put ahead of foreign agendas. The core principle of consensus should be upheld.

2. Kenyan and Ethiopian forces wholly lack impartiality required for participation in peacekeeping operations, and therefore cannot continue to serve within Somali borders as part of the AMISOM mission. Those forces must be replaced by contingents from countries, which do not have territorial ambitions, or historical enmities that will affect the mission (if needed).

3. As per the recommendations of the African Union Investigation Team on AMISOM Sexual Exploitation and Abuse in Somalia, an ad-hoc military court with representation from Somalia and all troop contributing countries should be established in Somalia in order to address the jurisdictional gaps for serious crimes- including sexual exploitation and abuse and killing of innocent civilians- committed by AMISOM civilian and military personnel.

4. The United States, the European Union and its member states, and United Nations must end their practice of sub-contracting Somali security out to Kenya, Ethiopia, and IGAD, and must redouble efforts to strengthen Somali federal institutions, including the military, if peace is ever to be made or kept in the Horn of Africa.

5. UN forces drawn from outside the Intergovernmental Authority on Development (IGAD) region must be specially recruited to help build the capacity of the Somali military so that it can finally fulfill its purpose of maintaining peace within the nation’s borders.

Ultimately, AMISOM in its current form resembles the curate’s proverbial rotten egg — parts of its are excellent, but the obvious corruption can be ignored no longer. Without a clear exit strategy for AMISOM, the threat that Al Shabaab poses to Somali citizens, neighboring countries and the world at large will only grow more dangerous. If no action is taken to remove frontline states from Somalia as well as carrying out a thorough review of AMISOM’s mandate, global terrorism will continue to be the Horn of Africa’s lot in the Great Wheel of history.
About the authors

Asha-Kin F. Duale is a Somali human rights lawyer and legal expert based in the United Kingdom. She can be reached by email at akduale@gmail.com.

Jibril Ali Aw Mohamed is a faculty member at the Ohio State University in the U.S.A and one of the founders of Gurmad. He can be e-mailed at mohamed.196@osu.edu