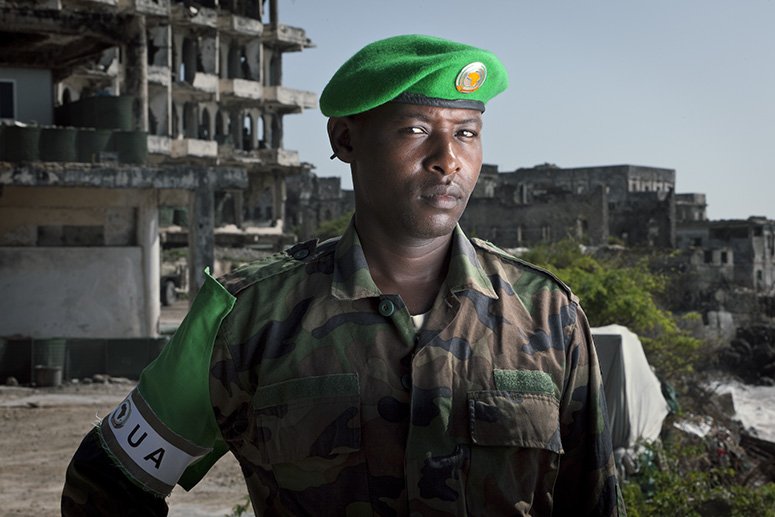 A Somali diplomat told Geeska Afrika Online that, ‘money earned from the peacekeeping operation provides a sense of security in a country with no practical social security programme for their millions of people in Kenya, Uganda, Burundi and Ethiopia’.

“Economic Interests:  Both AMISOM individuals and the African Union state are able to pursue their economic interests through UN peace missions in Somalia, and thus both are also motivated to participate in them. Kudesia and Rubenstein argue that ‘peace operations and the opportunity to participate in one are regarded as income generators and incredibly beneficial to participate in’” Similar to Ugandan soldiers, Brundi troops are also able to help their country’s economy through UN peacekeeping mission in Somalia.

An investigated Opinion Report By Abdiwahab Sheikh Abdisamad:  A recent trip to the Burundian capital, Bujumbura, has in fact opened my eyes to what a typical peacekeeper expects to gain from his tour of duty in Somalia. There, I met a Burundian peacekeeper who had returned from Mogadishu, the Somali capital. The officer, whose name I will keep it to myself, told me that, unlike the general belief that the African Union Mission in Somalia is there to finish off Al Shabaab and pacify the country, he was there for his own benefit and that Al Shabaab’s destruction was the least of his priorities.  ith a monthly pay of US$1200 and an extra US$500 allowance to boot, he earns more than ten Burundian and Somali soldiers each of whose monthly salary is US$50 and US$160 respectively.  So this peacekeeper has every pretext to fear death and plan for a happy future back home.

In fact, he was already building a new house, praying that he remains in Somalia until the building is finished.  “I don’t want to defeat Al-Shabaab. I would rather scatter them to prolong my mission,” he told me.  That peacekeeper’s position may not represent the view of all AU peacekeepers in Somalia who have sacrificed a lot to win the semblance of peace that now exists in that country.  But that should not distract us from the reality on the ground in Somalia that demonstrates the poor leadership exercised by the mission leaders who appear to lack clear-cut vision to defeat the militants and have so far did little to prepare for an exit strategy.

Such a laziness that could be the result of complacency could bring about disasters in the long run, especially in a country whose citizens are known for their open hatred towards foreigners on their soil. And recent developments illustrate how the mission is staring what is known as the “mission creep” in the eyes, because the AU force is clueless about Somalis’ psyche, aspirations and anger.

A widely watched and popular satellite TV, Universal, has recently aired a string of satires about the lack of fighting prowess within the force, showing peacekeepers cowering behind a tree, while a lone Somali soldier took the bullet. Another had it that the mission’s vehicles don’t stop when they cause accidents, mashing still bodies of killed people with the tyres of one car after another – of course for fear of stopping. In another show, a presenter has passionately appealed to the AU force to vacate the capital’s football stadium, saying Somalis need to have their land back.

It appears that the political section of the mission is doing little to advise commanders on the dangers of doing nothing on the battle front for almost one yea or of the risks of failing to nudge Somali leaders to deliver services to the citizenry. Many policy makers, both local and international, are oblivious to recent changes in the country: What has been tolerable just a few years ago is unacceptable this time round.  Somalis expect services from their current government, the first non-transitional administration since the collapse of the country’s central government in 1991.

Lawmakers are now calling for the president to resign for his failure to address the insecurity in the country. When Hassan Sheikh Mohamud came to power in 2012, Somalis believed that he signaled a change because his declared that security, security and nothing but security will be his priority. Now that they got insecurity, they want him out.  It shouldn’t be a far-fetched notion, therefore, to expect a motion against the viability of the AU mission in the near future. It is really sad that, instead of planning for an exit strategy, the mission is digging in, eroding its earlier successes and reputations.  AMISOM’s recent decision to add Ethiopian forces to the force were both mistakes of strategic and PR proportions, a bad way to lose the war on the hearts and minds of ordinary Somalis.

Prior to Ethiopians’ inclusion, there was a lot of noise over the wisdom of enlisting Kenyan forces. To bring Ethiopians on board will only add to the exiting anti-foreign sentiments in the country. Somalis look askance at both nations.We should remember that the aim of deploying peacekeepers in Somalia in 2007 was to replace Ethiopian troops who were seen by many Somalis as an invading and detested force In fact, there is no plausible and strategic reasons that can compel the mission to add Ethiopian forces who, for years, operated in Somalia with or without the consent of the national government in Mogadishu but achieved little peace in areas under their control. Many Somalis still recall Addis Ababa’s wicked role in creating and supporting predatory warlords and factions that shattered the Somali state. Ethiopia has even perpetuated the Somali conflict by undermining legitimate peace processes and imposing its own solution on the Somali people.

Human Rights Watch and the Amnesty International have documented atrocities committed by Ethiopian forces during their two year occupation in Somalia, such as shelling hospitals, residential areas and slaughtering people like goats. In its 2007 report, the U.N. Monitoring Group has also accused Ethiopian forces of using phosphorous bombs that melted people. So sanctioning Ethiopia’s presence in Somalia is simply aiding the militants to get more recruits –and they’re not letting such an opportunity to pass up.

The Al-Qaeda-linked group’s recent daring attacks on government targets in Mogadishu, particularly last month’s assault on the presidential palace is a clear evidence of the extent AMISOM took its eyes off the militants. The group’s 5,000-force should be no match for a 22,000-strong force. But it is one thing to have seasoned, well-paid, well-armed soldiers. It is quite another to be serious about defeating al-Shabaab. To have attacks on the presidential palace almost three years after the militants were forced to withdraw from the capital is an utter disgrace to the “an African solution to African problems” notion that has become the mantra after 2011.

AMISOM should stop resting on its laurels and finish the job and know that the 2011’s much-acclaimed victory is now a distant victory, and that militants are now pushing back against the continental mission. The UN agencies in Somalia have already taken note of this latest setbacks, and now Uganda is deploying about 400 Ugandan Special Forces, known as the United Nations Guard Unit, to protect U.N. installations.  Rumors are also rife in Mogadishu that Somali government officials are not content with foreign peacekeepers or even happy having them as guards for fear that they may be a part of a wider web of war-profiteers. That is a rude blow to a force that has sacrificed thousands of its soldiers to achieve the little peace that exits in Somalia. To even suspect peacekeepers, a once loved and highly admired lot, of mischief must be the result of overstaying Somalia, whose citizens want the force to do its job and depart. Overstaying is courting disaster, so peacekeepers must leave while they’re still loved.