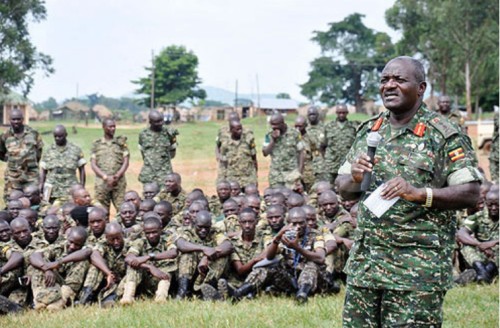 The Chief of Defense Forces, Gen. Katumba Wamala, against engaging in “any relationship whatsoever” with Somali women.

The Chief of Defense Forces, Gen. Katumba Wamala, on Saturday cautioned UPDF soldiers in Battle Group 16 and the UN Guard Unit who are flying to Somalia Monday against engaging in “any relationship whatsoever” with Somali women.

Katumba Wamala who replaced Aronda Nyakairima in 2013 as CDF cautioned male UPDF soldiers not to engage in any relationship, including being intimate with Somali women, as the move could jeopardize the mission.

This was during the sendoff ceremony of 1972 troops at the Singo Military Training School in Nakaseke District Saturday.

The Ugandan soldiers under Battle Group UGABAG 16 (1442) and the UN Guard Unit (530) are flying to Somalia to replace UGABAG 13+ and another UN Guard Unit that are rotating out.

They will be in the Horn of African country for the next one year (2016), under the African Union Mission in Somalia (AMISOM), which will end 2017.