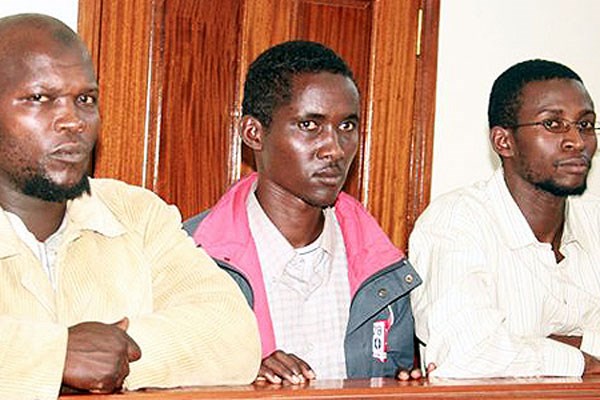 The Ugandan ringleader of a 2010 bombing by the Al-Qaeda-linked Al-Shabaab that killed 76 people in Kampala was found guilty on Thursday of masterminding one of the region’s worst attacks in decades.Twin suicide blasts claimed by Somalia’s Al-Shabaab targeted football fans watching the World Cup final between the Netherlands and Spain at a restaurant and a rugby club in the Ugandan capital.

Judge Alfonse Owiny-Dollo said Issa Luyima, a Ugandan, had been shown during the trial to have played a key part in planning the attacks.

“I therefore find Issa Luyima guilty for the offence of terrorism of which he was charged, so I convict him,” Owiny-Dollo said.

Prosecutors said Luyima — one of 13 men receiving their verdicts — had gone to Somalia, where he trained with Al-Shabaab.

The judge was reading the verdicts against 12 other suspects also in court.

The 13 men, all of whom had pleaded not guilty, were brought to the High Court in Kampala under heavy security, with roads and shops around the court closed.

Judge Owiny-Dollo, who began to read the verdicts mid-morning, could apply the death sentence to those found guilty.

The 13 men — seven Kenyans, five Ugandans and one Tanzanian — have been tried on a range of charges including terrorism, murder and membership of a terrorist organisation.

Two men were already found guilty in 2011 for their role in the attacks.

Edris Nsubuga, who admitted terrorism charges, was spared the death penalty because he expressed contrition over the carnage and was jailed for 25 years. Co-accused Muhamoud Mugisha received five years for conspiracy to commit terrorism.

The Kampala trial was delayed after the lead prosecutor was murdered in March 2015. Joan Kagezi, acting assistant director of public prosecution, was shot dead by men on a motorbike as she drove home with three of her children.

Al-Shabaab continues to target countries in the region, carrying out the 2013 assault on the Westgate Mall in Nairobi that killed at least 67 people, and the attack on Kenya’s Garissa University College in April 2015, killing at least 148 people.

Thousands of Ugandan troops form the backbone of the African Union Mission in Somalia (Amisom), the UN-backed force established to fight the Al-Shabaab Islamists and protect the internationally recognised government.