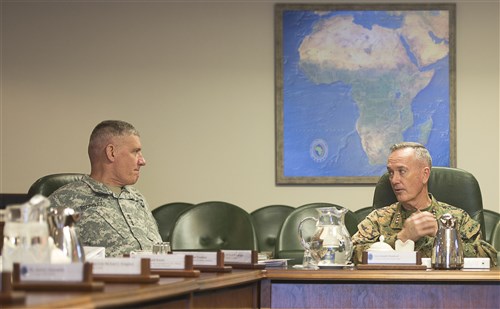 The first is neutralizing the terror group al-Shabab in Somalia, officials said, and transitioning this effort from a mission led by the African Union Mission in Somalia to one in which the Somali government secures its own territory.

The second line of effort centers around the failed state of Libya, officials said, adding that the effort focuses on containing the instability in the country.

Officials said the third line of effort is to contain Boko Haram in West Africa.

Fourth, officials said, Africom will focus on disrupting illicit activity in the Gulf of Guinea and in Central Africa.

This is a large job for a small command, an Africom official said. “The only permanent location we have is Camp Lemonnier in Djibouti,” he said. “Everything else is a very light footprint.”

The command does have cooperative security and contingency locations across the continent, officials said, noting these are essentially “cold bases” that would only be used in the event of an emergency.

In West Africa, Dakar, Senegal, is one of the cooperative security locations and U.S. forces used it during the Ebola crisis last year, officials said.

Officials said the bases also allow the command to protect American lives and property in the high-risk, high-threat posts. There are 15 of those posts in Africa, officials said.

“Al-Shabab has been pushed out of most of the major population centers and is only a power in the Juba River Valley,” an official said. However, the official added, al-Shabab “is not a spent force” and it remains a threat — particularly in terms of targeted attacks against neighboring AMISOM contributors.

Africom continues to monitor the al-Shabab threats to Kenya, Ethiopia and Uganda in particular, officials said.

“The emerging issue we’ve seen in al-Shabab over the past six months is the movement at the lower levels of individuals toward [the Islamic State of Iraq and the Levant],” an official said. “Pro-ISIL sentiment is increasing in Somalia and we’ve seen some efforts by al-Shabab leaders to strike down these efforts. Al-Shabab leaders remain firmly allied to al-Qaida.”

Officials said this is an indication of the power of the ISIL “brand” in the extremist world. ISIL, especially after its success in Iraq and Syria, is viewed by extremists as a winning team, while al-Qaida is viewed as having waning operational capabilities. Al-Shabab has been manhandled by the AMISOM troops and the mid-level and lower extremists see ISIL as its savior, officials said.

Core-ISIL has not accepted the al-Shabab splinters as members of the caliphate, officials said.

“From our viewpoint, ISIL probably has very strict criteria for what groups they want to let into the fold,” the official said. “[They] want to make sure the groups coming in can sustain themselves, that they have a plan and have an ability to move.”

The Islamic State affiliates in Libya and Boko Haram in Nigeria have been connected with the extremists in Syria and Iraq for a number of years, the officials said. Boko Haram “officially” joined the terror network last year, officials said.

“Since then, what we’ve seen is an enhancement of Boko Haram’s propaganda and messaging efforts,” an official said. “That has been the most apparent result of the ISIL-Boko Haram ties. Their videos are more professional and tighter. They speak like an ISIL affiliate.”

But there has not been a significant shift of resources, people or even tactics, techniques and procedures to Boko Haram, officials said. The Nigerian-based terror group “is a self-sustaining entity,” an official said.

“We would expect that enhanced affiliation in the Horn of Africa would probably follow the same path,” the official said. “We would see improved propaganda and messaging, but not a shift of resources.”

Terrorists in East Africa need material and resources from ISIL, but they are not going to get it, officials said. Core ISIL is hurting itself — the Islamic State has lost Beiji and Ramadi in Iraq, it is under assault from the Kurdish peshmerga and the Syrian anti-ISIL coalition is making progress, officials said.

The coalition oil campaign is also having an effect on ISIL’s source of wealth, officials said.

Strengthening the AMISOM force and its capabilities will also serve to strengthen the Somalian government, officials said.

Africom is looking to contain ISIL in Libya and degrade it, said officials, who estimate there are roughly 3,500 ISIL terrorists in Libya.