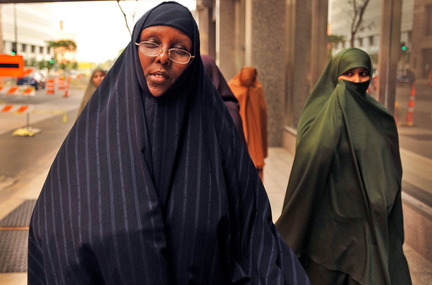 Two women who U.S. prosecutors say led an online group in raising money to support the Somali insurgent group al Shabaab were convicted by a federal judge on Tuesday following a trial in U.S. District Court in Virginia.

Muna Osman Jama, 36, and Hinda Osman Dhirane, 46, were found guilty of organizing the so-called “Group of Fifteen” women from eight countries that helped finance al Shabaab military operations and safehouses in Somalia and Kenya, according to the U.S. Attorney’s Office for Eastern Virginia.

“These women funneled money to a terrorist organization which was conducting a violent insurgency campaign in Somalia,” U.S. Attorney Dana Boente said in a written statement.

“National security is the top priority in this office and we will continue to work closely with our law enforcement partners to investigate and prosecute those who provide material support to terrorists,” Boente said.

It was not clear who represented the two women in the proceedings.

Prosecutors said Jama and Dhirane sent the money they raised through the chat room to financiers of al Shabaab in Somalia and Kenya, referred to as the “Hargeisa side” and the “Nairobi side”, respectively.

Jama, of Reston, Virginia, and Dhirane, of Kent, Washington, were arrested in July 2014, along with a third woman, Farhia Hassan, who was taken into custody in the Netherlands.

At the time of those arrests two other women accused of being involved in the operation, Fardowsa Jama Mohamed and Barira Hassan Abdullahi, were named as fugitives.

The “Group of Fifteen” included women from Somalia, Kenya, Egypt, the Netherlands, Sweden, the United Kingdom and Canada, as well as Minneapolis, according to evidence at trial.

Prosecutors said recorded calls between the Group of Fifteen showed that they had close contacts with al Shabaab leadership and that its members were heard laughing about 2013 attacks on the Westgate Shopping Mall in Nairobi and the Boston Marathon.

Jama and Dhirane were each convicted of conspiracy and providing material support to a foreign terrorist organization and face a maximum of 15 years in prison when they are sentenced in January.

Al Shabaab, which once ruled much of Somalia, wants to topple the Western-backed government and drive out African AMISOM peacekeepers made up of soldiers from Kenya, Djibouti, Uganda, Ethiopia and other African nations.

On Tuesday the group claimed credit for ramming a military base with a suicide truck bomb, shooting dead an intelligence officer and killing 12 people in a Kenyan border town in a series of strikes over 24 hours. (Reporting by Dan Whitcomb; editing by Diane Craft)