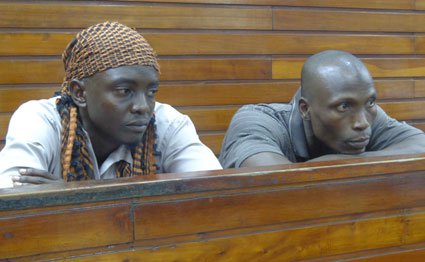 MOMBASA (HAN) July 29.2016. Public Diplomacy & Regional Security News. By Joseph Akwiri. Two men accused of being members of a Kenyan secessionist group were sentenced to death on Friday for murdering four police officers on the eve of national elections in 2013.

Prosecutors said Jabiri Ali Dzuya and Bwana Mkuu Alwan were members of the Mombasa Republican Council (MRC), a movement which campaigns for the independence of Kenya’s coastal regions.

Both had denied the charge, but the judge at Mombasa’s high court, Martin Muya, said there was enough evidence to show they had “brutally murdered four officers on duty”.

The MRC had called for people to boycott the 2013 elections, demanding a separate government for the Indian Ocean coastal strip which includes lucrative tourist beaches.

The movement, outlawed until a 2012 court ruling lifted a ban, accuses the government of marginalising groups that live there.

It has denied police accusations that it was behind a string of sometimes deadly attacks on police stations and people from outside the area before the vote.

Kenya has not executed anyone since 1987 – condemned prisoners usually end up serving life in jail.

Uhuru Kenyatta, from one of Kenya’s richest families and son of its founding president, was declared winner of the 2013 presidential election, which the opposition said was rigged. (Editing by George Obulutsa; Writing by Andrew Heavens) PHOTO | PHILIP MUYANGA | NATION MEDIA GROUP