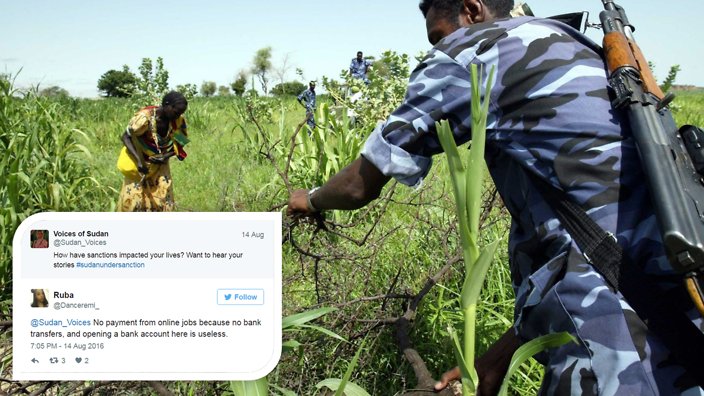 The hashtag #SudanUnderSanction began trending recently when young Sudanese took to Twitter to share the adverse impacts of life under more than two decades of US sanctions.

On last night’s episode of The Stream on Al Jazeera, Ahmed Elmurtada, an information security engineer in Sudan, told host Femi Oke that he’s lived almost his entire life under the sanctions, which were first imposed in 1993, two years after he was born, and massively expanded in 1997.

“You just cannot do IT work without any of the United States,” he says, adding, “The sanctions are not just impacting the technology field directly, they are also effecting in an indirect way the medicine, the health, the education and every single thing in our life. There are no payment systems in Sudan. You cannot transfer funds. You cannot get access to free online education. You cannot even get grants from outside Sudan if you have a non-profit organization… At the end, who is getting the worst of it, is the normal, local Sudanese citizens, the ones who cannot afford to get outside of Sudan to get treatment or better education.”

His complaints were echoed by a host of tweets shared on the show, which ranged from stories of being unable to access app stores and sites like Airbn from inside Sudan, to salary payments being delayed by three months while responding to the Ebola crisis outside of Sudan.

Ibrahim Warde, author of The Price of Fear: The Truth Behind The Financial War On Terror,” says, “Sanctions are good politics but bad policy… Sanctions tend to be a blunt instrument. It’s one thing to say a country is misbehaving and ought to be punished for it but when it comes to the execution of the sanctions, sanctions tend to create a lot of collateral damage, in that, typically, regular people suffer from sanctions whereas those governments that are supposed to be the bad guys often thrive on sanctions… because they can blame all the ills of society on sanctions.”

Similarly, Omer Ismail, a senior advisor for the Enough Project, says sanctions are being used as a scapegoat by the Sudan government. “When you are a country that designates 70% of its budget for the security and armed services sector and then you have 7% only of your budget for health, education and services combined… that is a country that is reckless,” he says.  “The economic woes of Sudan are of the making of the government of Sudan. Yes, the sanctions may have hurt some sectors and some people in Sudan, but you cannot place the biggest blame on sanctions. The biggest blame is on the government of Sudan.”

Ismail did call for more targeted sanctions though and the lifting of more general sanctions.

International support for the sanctions increased after Sudan began carrying out a military campaign in Darfur, which has led to the killings of up to 300,000 people and the displacement of more than 2.5 million since 2003.

But Nagwa Konda, a civil society activist from Nuba mountains, says it’s not just Darfur that the world should hold Sudan’s government accountable for.

However, speaking in a video comment from Sudan, Mahmoud Elmutasim questioned the legitimacy of foreign interventions. “Of course, the Sudanese government is an illegitimate government with a well-known human rights violations history. In a sense, it deserves to be punished by the international community. At the same time, I don’t see the current international community as the suitable agency to pressure third world countries like Sudan, because international relations depends only on power politics, without any sense of democratic representation for third world people. So I’m against the sanctions because the United States and its allies always put on the human rights mask to cover their narrow national interests.”

In contrast, speaking to Ahmed and others like him suffering under the sanctions, Konda said, “If the sanction is affecting you in your personal life, let us put our hands together and put pressure on the government of Sudan to behave and become responsible and protect its own people, rather than bombing them and killing them. When they change their behavior, that’s when we all together come and call the US and the international community to lift those sanctions.”