Home frontpage ‘Turkey is the most active country in Somalia’ 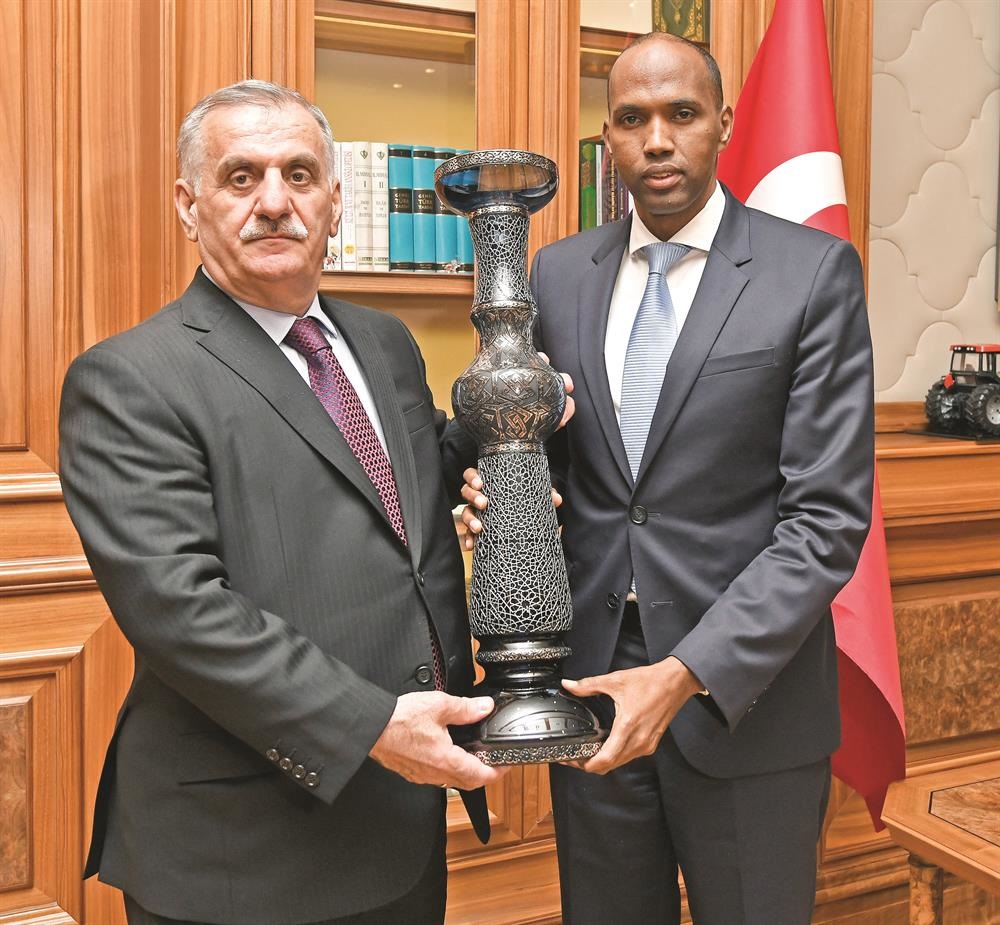 Somali Prime Minister Hassan Ali Khaire visited Albayrak Holding on Friday, meeting with Chairman Ahmet Albayrak and other top executives. Economic relations between the Somalia and Turkey as well as Albayrak Holding’s investments in Somalia were discussed. Khaire, who met with President Recep Tayyip Erdoğan on Thursday, evaluated his visit to Turkey on the TVNET television channel.

“In 2011, Erdoğan came to Somalia with his family. They saw the difficulties that the Somali people experienced. Since that time, Turkey has been supporting us through the development of infrastructure, the construction of airports and roads, and the formation of other institutions. Turkish Cooperation and Coordination Agency (TIKA) continues to distribute humanitarian aid. The Erdoğan Hospital was built. This humanitarian aid is visible throughout Mogadishu. Investments and aid bring the two countries closer together,” Khaire said.

Turkey-Somalia ties to be strengthened

Turkey’s engagement in Somalia has resulted in visible results to the country in every field from infrastructure to health.

Since 2011, our relations with Turkey have been gaining strength every day. Turkey is the strongest, most influential and most active country in Somalia. Turkey’s largest embassy is located in Somalia, as well as their largest military base. Turkey has contributed to our economy and many other areas. We are confident that we can work more with the Turkish government and Turkish people. I had the opportunity to meet with both President Recep Tayyip Erdoğan and Prime Minister Binali Yıldırım. We will continue to work together to improve security and the economy, and to forge a new strategic plan. I think that relations between the two countries will move forward over the next two or three years,” Khaire said.

Turkey opened its largest overseas military base in Somalia in late September, and will train more than 10,000 soldiers in an effort to institutionalize and restructure the police and military services, battle the terrorist group al-Shabaab, and help expand the government’s authority into more towns and regions.

“We are in the process of opening up opportunities for Turkish investments in Somalia. We are forming various strategies to ensure the Somali people can access products from Turkish people. There are short and long-term plans for this. A military base was established for the training of the Somali national army. These began in 2015. As of next year, over 1,000 personnel will have received this training. This facility is an important step in the development of the Somali national army. We see terrorist attacks in Somalia. We also see examples of this in Turkey. The work to be done will ensure that we defeat terrorism and that we can move our nations further forward. Somalia today offers more hope and opportunity when compared to the past 10 to 20 years,” Khaire said.

Trade volume to be boosted

“During our visit to Turkey, we held comprehensive meetings with the Turkish business community. I learned that contractors and investors make as much as $350 billion worth of investments outside of Turkey. Only two percent of this goes to Somalia. For both countries we can increase this investment volume. I presented about the importance of investing in Somalia. The strategic partnership process of the two governments continues. We will increase the trade volume between the two countries in a comprehensive manner. We plan to create opportunities in the market. With the new steps to be taken, relations between the two countries will become brighter every day,” Khaire said.