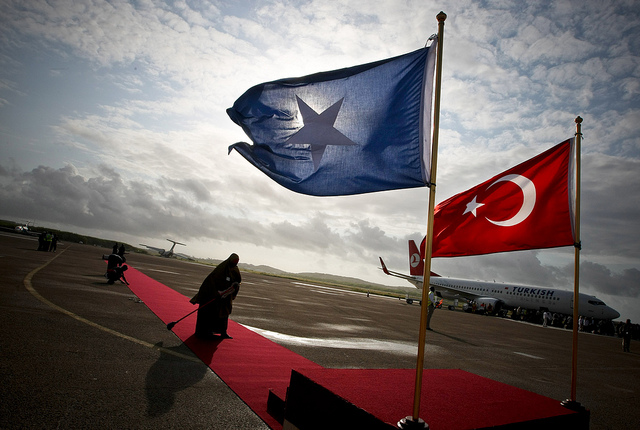 The plane carrying President Recep Tayyip Erdogan together with his wife, Emine, and a large delegation landed at the city’s sea front airport.

The dignitaries were received by a galaxy of Somali officials, led by President Hassan Sheikh Mohamoud. The occasion was akin to a homecoming of long-lost nationals.

Besides President Mohamoud, those who lined up to shake the hands of the Turkish delegation included the Speaker of the Federal Parliament, Mr Mohamed Osman Jawari, the Prime Minister Mr Omar Abdirashid Sharmarke, Cabinet ministers and MPs.

Even regional leaders from Puntland, Jubaland, Southwest and Galmudug states lined up to welcome President Erdogan and his delegation.

“Kudos and keep the good spirit,” chanted the people lining up along the road and waving both the Somali and the Turkish flags.

The story of the good fortunes was taking another turn.

Amid tight security by the Somali law enforcers and the peacekeepers serving with the African Union Mission in Somalia (Amisom) and a unit of Turkish law enforcers, the Turkish delegation was driven to Mogadishu’s northern Abdulaziz District where President Erdogan and his Somali counterpart jointly opened a gigantic premise meant to house the Turkish Embassy in Mogadishu.

The new premise, which overlooks the popular Lido Beach, is the largest Turkish embassy in the world. It’s sheer size is a statement about the growing relations between Somalia and Turkey.

Just after cutting the ribbon to declare the embassy building open, President Erdogan promised that Turkey would establish an army training camp in Somalia.

“I may come back to open the camp,” he hinted.

Similar agreements were signed for the training for Somali Police Force, educational collaboration, health, energy and minerals. Other areas earmarked for bilateral cooperation between Turkey and Somalia was human resource development and the joint creation of employment opportunities.

Ministers from both sides, including Somalia’s Foreign minister Abdisalam Hadliye Omar and his Turkish counterpart Mevlüt Çavuşoğlu, signed for both governments.

The occasion offered President Erdogan an opportunity to underscore the amicable relations between Turkey and Somalia, asserting that such bonds would be strengthened.

“Turkey is going to build a 10km road in Mogadishu, extending the network built by Turkish agencies,” remarked President Erdogan.

“Educational and other vital projects will also be implemented,” he added.

Special gift to the Somali people

The Turkish leader disclosed that new premises to house the Somalia Federal Parliament would be built in Mogadishu within two years.

“Its plan has been completed and it will be a special gift to the Somali people,” he affirmed.

The visit was President Erdogan’s third to Mogadishu.”

“I can sense that Somalia has advanced and a lot has been done. Just to mention a few, we opened in 2015 the educational hospital and today we have presided over the embassy building, complete with its amenities,” President Erdogan added.

He promised that within the fasting month of Ramadhan, Turkey would send a ship with humanitarian aid to the victims of drought in northern Somalia, especially Puntland and Somaliland.

President Erdogan underlined that Turkey and its agencies were not operating in Somalia with blind eyes, stressing that they have a good understanding about the mutual benefits.

“Many people expected that we would leave Somalia in a short time. That has not happened. Instead, our continued presence has boosted the confidence of this nation,” he said.

He indicated that the stakes were too high for Turkey to exit Somalia, expressing his awareness about the elections later this year.

President Erdogan wished the nation a smooth electoral process, pointing out that his delegation came to Mogadishu despite a deadly attack on a hotel in Mogadishu, claimed by the jihadist group Al-Shabaab.

“We have been saddened by the terrorist attack in Mogadishu that affected tens of people. But, it did not thwart our visit to this city.”

President Erdogan was delighted that what was envisioned five years earlier, was being achieved.

On the humanitarian side, Turkey continues to provide support to the people in need and the organisations caring for them, in an initiative started during President Erdogan’s first tour to Mogadishu in August 2011.

The Turkish Development Agency (TIKA) has implemented several projects in Somalia in the educational, health and infrastructure sectors.

The notable projects include a 35km road that links the city’s international port and airport, the state house and the new Turkish embassy and the educational hospital named Recep Tayyip Erdogan in honour of the Turkish president.

Ever since the Turkish support started in Somalia, Mogadishu’s Adan Abdulle International has benefitted from the much-needed rehabilitation including the installation of a brand new terminal, an air traffic control tower and a fully equipped workshop.

At the time the Turkish leader opened the airport terminal on January 25, 2015, he promised to build 10,000 housing units to alleviate the housing problems in Mogadishu.

The Turkish-Somali Business Forum, launched in Istanbul in May 2013, was exploring commercial opportunities in both Somalia and Turkey.

Favori LLC manages Mogadishu’s airport while the Somali government signed a 20-year contract with Al-Bayrak, a Turkish firm, to run the Mogadishu port. The company undertook to modernise the facility to international standards.

Turkish delegations occasionally visit upcountry regions, seeking out the sectors to improve or businesses to undertake.

No other nation is so visible in its involvement in Somalia’s development, particularly in Mogadishu, than Turkey.

The Euro-Asian country, its red background flag and President Erdogan’s face are a household and easily recognisable in Somalia.