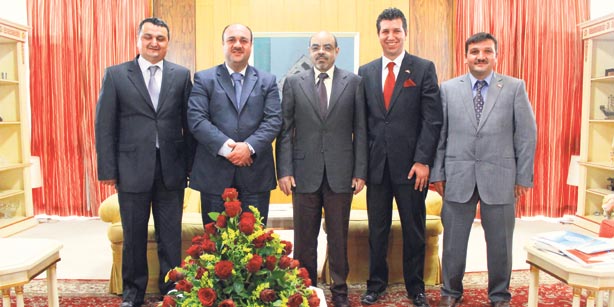 Share on Facebook
Tweet on Twitter
ADDIS ABABA (HAN) July 25.2016. Public Diplomacy & Regional Security News. By Birhanu Fikade. The coup attempt that has engulfed various cities of Turkey last week has been claimed to be linked to the Fethulah Gulen Movement (FETO), which the Turkish government labeled as terrorist group. However, now, the Turkish government is also claiming that the groups linked with the FETO are operating here in Ethiopia.

The allegation of having links with the Turkish coup d’état is something that Gulen, a renowned Islamic scholar, who resides in the US, denies vehemently.

In an exclusive interview, Ambassador Fatih Ulusoy told The Reporter that there are elements of the FETO group operating in Ethiopia and that the Turkish authorities have informed the government about the linked group’s operations here.

When asked whether groups or individuals linked have institutional set up here, the ambassador said: “They have schools. They have businesses running here. They are not limited to Addis. They remain active in other cities. Once again, I like to confirm that we will share relevant information we have with Ethiopian officials on this issue.”

The Ambassador mentioned that Somalia has banned FETO affiliated schools and hospitals and are given notice to leave the country in one month’s time. The decision the Somali government has passed, according to Ambassador Ulusoy, came in right after the failed coup attempt “perpetuated by some elements in the Turkish armed forces”, he said.

The coup attempt was “foiled”; nevertheless it has caused fatalities of 246 citizens, police officers and few soldiers who have been killed during clashes with the perpetrators. The Turkish government issued statements that suggested some 1,400 people to be injured.

“More than 9,000 people affiliated to this act have been detained. The number of arrests is increasing. We have 24 coup plotters identified dead and 50 injured. But I think these numbers will rise. Another interesting development during that night was that a group of eight had fled to neighboring Greece with a helicopter. Our authorities have been in contact with Greek counterparts. So far, we have managed get our helicopter back”, the ambassador said. But, reports suggest that the number of detained, rounded up or suspended is climbing by the day and that it has reached some 50,000 so far.

According to reports, Fethulah Gulen was one of the closest individuals to President Recep Tayyip Erdogan until the former was claimed to be linked to a corruption investigation that has implicated the president in 2013. Erdogan later escaped prosecution but the event fortified a deep animosity among the two individuals. Residing in Pennsylvania, Gulen as referred in many instances as the cleric and the well-to-do businessman has denied any involvement with the staged coup.

In Ethiopia, the Turkish government is also said to be sponsoring the restorations of historical religious buildings and mosques. In the Harari Regional State, the restoration of an Ottoman Consulate building which dates back to the time of the Ottoman Empire is to said to be finalized. In the Tigray Regional State, the sacred Al Negashi Mosque, sanctified as Mecca and Medina, is expected to be reinvigorated to attract both local and foreign visitors by backing of the Turks. In addition to that, the annual scholarships Turkey offers to Ethiopia currently embrace some 88 students annually.

Investing some 2.5 billion dollars in Ethiopia out of the six billion the country put forth in Africa, Turkey vows to increase the trade volumes of the two nations to jump to USD one billion as opposed to the current 420 million dollars.