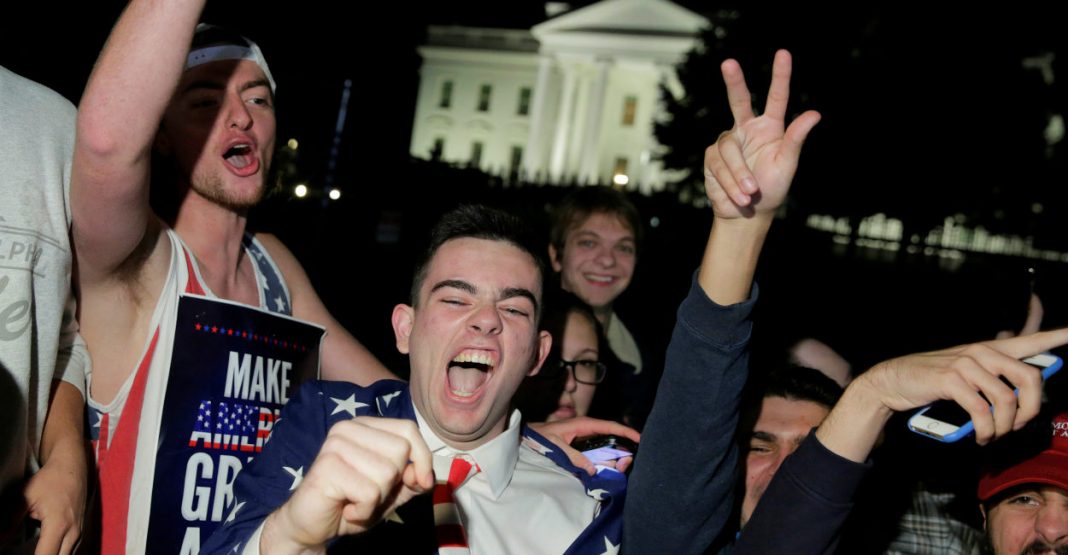 At 2 a.m., Clinton campaign chairman John Podesta spoke to subdued Clinton supporters gathered in New York City to say the Democratic nominee would not be speaking and would wait until all the votes are counted.

Assuming he prevails, Trump will be sworn in Jan. 20 having surprised the political world, first in the Republican primaries when he vanquished more than a dozen serious contenders, and then in the general election contest with Clinton.

Along the way,  he pledged to build a wall across the southern border, encourage job creation, repeal and replace Obamacare, defeat radical Islamist terrorists, and take a tougher stance against trade agreements such as the Trans-Pacific Partnership.

Trump’s dramatic victory over Clinton caps one of the most unusual presidential election years in recent history, featuring two big personalities well known to Americans for more than two decades.

The president-elect was a billionaire New York real estate mogul before becoming the host of NBC’s hit show “The Apprentice.” Before becoming secretary of state under President Barack Obama, Clinton was the first lady and a U.S. senator from New York.

Trump captured major swing states such as Florida, Ohio, and Pennsylvania that Obama carried twice. He also captured states that have been solidly blue in presidential races, such as Michigan and Wisconsin.

Republicans also maintained control of the House and the Senate, which could provide a boost for Trump’s policy agenda.

However, Trump has at times clashed with those who initially endorsed him, including such senior Republicans as House Speaker Paul Ryan, R-Wis., and Sen. John McCain, R-Ariz.

During the campaign Trump took the unusual move of releasing a list of his potential high court nominees, which reassured many worried conservatives.

The vacancy left by the death in February of Justice Antonin Scalia, a conservative icon, raised the stakes of the Supreme Court as an issue. Confirmation of a single justice could change the ideological makeup of the court.

For Clinton, who once had a commanding lead in polls, it was a crushing defeat.

As in the 2008 Democratic primary season, Clinton began as a heavy favorite to win but struggled for months to defeat her main foe, Sen. Bernie Sanders, I-Vt.

Obama made an extra effort, stumping for Clinton on a near-daily basis for the final two weeks of the campaign.

Clinton spent much of the campaign fending off an FBI investigation into her private email server, which she used to conduct State Department business.

Trump faced his own October surprise when an 11-year-old video surfaced in which, without realizing he was being recorded, he described kissing and groping women. After that, more than a dozen women came forward to allege Trump had sexually harassed them.

The tone of the campaign was considered almost unrelentingly negative, as Trump routinely referred to Clinton as “Crooked Hillary” and Clinton referred to his supporters as a “basket of deplorables.”