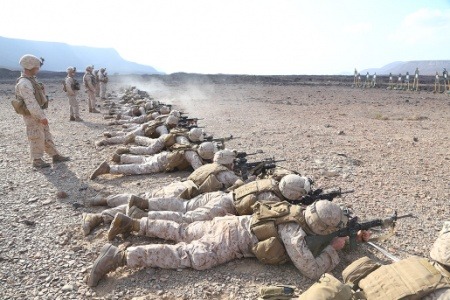 Al Shabab has grown its territorial presence and increased violence in Somalia over the last five months thanks to policy decisions by the Trump and Biden administrations that have hindered training of Somali forces and added layers of bureaucracy to drone strikes, say Africa security experts.

When former President Donald Trump ordered some 900 troops out of Somalia in December, with it went the capability to conduct drone strikes from Mogadishu, giving Somali terrorists free rein to wreak havoc and grow stronger. U.S. Africa Command must now fly soldiers into and out of Somalia for brief training exercises and long-haul drone flights from thousands of miles away, say security experts.

At issue, in part, is a Biden administration order that drone strikes outside three longtime war zones must be approved by the White House.

“I can certainly empathize with both chief executives’ desires to not get engaged in Somalia, but the problem is not going away,” retired U.S. Army Col. Chris Wyatt told the Washington Examiner.

“Al Shabab still has objectives, and they still strike with impunity. It seems, particularly in Mogadishu, blowing things up and attacking people,” he added. “Both with Trump ordering a troop withdrawal, and then Biden putting constraints on the use of drones, both obviously can have deleterious impacts on what we can accomplish there vis-a-vis al Shabab,”

Africom continues to make the argument that al Shabab has global ambitions to strike the U.S. homeland.

“U.S. Africa Command activities to counter al Shabab represent a commitment to defending the U.S. homeland and serve as a preventative measure to safeguard U.S. citizens,” he said. “America learned a very painful lesson on Sept. 11, 2001, with significant loss of American lives. Al Shabab is an affiliate of al Qaeda.”

The Biden administration imposed on Jan. 20 a restriction on the use of drone strikes outside of Afghanistan, Iraq, and Syria. Any strike outside the war zones now requires White House approval.

“I would expect that it could potentially result in us not getting targets,” Wyatt said, assessing the delay that might occur when a target in Somalia is identified, and the command order from Africom headquarters in Stuttgart, Germany, is delayed until the National Security Council in Washington, or President Biden himself, approves or rejects the request.

An Africom spokesperson told the Washington Examiner that the command is still fighting terrorists despite the policy directives.

“While limited face-to-face engagement is challenging, our job is to solve difficult problems,” the spokesperson said.

“We’ve been able to maintain our relationships, training, and operational support to partners through aggressive communication and frequent visits back into Somalia,” the representative added. “We and our partners have continued to get after al Shabab both during and after the reposition.”

But clearly, Africom’s capabilities to attack al Shabab have been affected.

Drone strikes now must fly from bases thousands of miles away, such as an air base in Djibouti, America’s only African military installation. U.S. Africa Command does not reveal where drone strikes initiate, but the number of strikes since the troop removal has dropped precipitously.

In 2020, U.S. Africa Command launched 51 airstrikes in Somalia against al Shabab and one against an ISIS target. Following the Trump order, there have been just six airstrikes, three before and three after the repositioning of forces was complete.

Africom has gone after the terrorist group by handing off its intelligence to less-capable Somali partners.

“We are still able to develop targets and pass those to partner forces as we have consistently done in the past,” Africom said, noting drone strikes are only used when other means are “unavailable or not feasible.”

The spokesperson added: “Al Shabab is still very much at risk from our partner forces.”

A decade ago, Wyatt was deployed with the Army in East Africa, one of eight Africa tours that he served with the Defense Department.

At the time, he opposed the growing American military presence in Somalia.

“I was serving, so it’s not something that I spoke out about, but personally, I was opposed to it,” he said, remembering the time when the United States started ramping up its presence in Somalia.

Then, he was coordinating a program that used State Department funds to pay European Union military trainers working with the Somali Armed Forces in Uganda.

“From my perspective, that was a very effective method to do it,” he said.

The approach achieved a number of objectives: It trained Somali Armed Forces, it avoided security concerns within Somalia, and it paid the bills without committing American troops.

But the short-term training was not long-lasting.

“A bunch of Americans or Dutchman come in to train you for two weeks, you’re there. Hey, you have a great relationship, a lot of fun. You guys talk, you learn lots of stuff. Good,” he said. “They leave, well, you go right back to your old habits. You haven’t seen an example to follow.”

Africom is trying to use technology to bridge the gap and get around the policy restriction to base U.S. troops in Somalia.

“We continue to train and support our Somali partners,” Africom said.

In January, Africom flew in trainers for one such engagement.

“U.S. forces maintain regular contact between face-to-face visits through remote advise and assist engagements conducted virtually much as they did before the reposition,” the spokesperson said.

Now, however, Wyatt sees the value of keeping soldiers in-country to continue to mentor the forces.

“If you simply fly in and do a quick training event and leave, you lose a lot of the value of the lasting impact and changing culture, which is, I think, necessary for Somali forces,” he said.

Africom declined to assess the cost difference of flying troops in and out versus training in-country. The command also declined to describe how operational tempo for kinetic activity against terrorist groups has changed since the repositioning was complete in January.

A decade ago, Wyatt saw a force of just 50 U.S. soldiers in Somalia, enough to get the job done.

However, he noted that as long as the Somali government cannot provide the economic and security conditions for its people, terrorist groups will still draw followers.

“The short answer here is that al Shabab is not going to go away,” Wyatt said. “They appear to be a presence that is stubborn and does not want to go. The answer to removing al Shabab I don’t think is kinetic, though.”