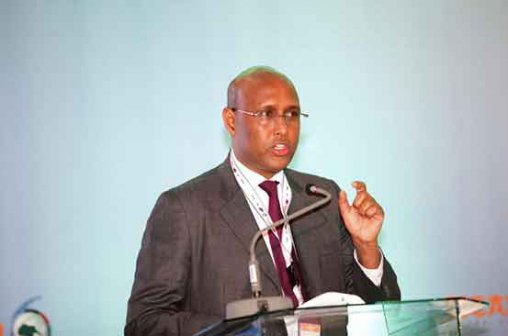 Trade Cabinet Secretary Adan Mohamed is in Brussels to lobby for Kenya to continue accessing European Union (EU) market duty-free. The Market Access Regulation (MAR) will expire on October 1, 2016, meaning that Kenya risks exporting to the bloc at a higher cost. “This development poses a great risk to Kenya,” said Mr Mohamed. He said the issue of renewing the preferential trade terms needs to be addressed before the deadline date set by the EU. The East African Community (EAC) member states are required to sign and ratify the new Economic Partnership Agreement (EPA) to continue accessing the EU market on duty free quota basis. Accompanying CS Mohamed (pictured) is Trade Principal Secretaries Chris Kiptoo, Betty Maina of East African Community and other senior government officials.

The development comes in the wake of failed diplomatic efforts by EAC to resolve issues that have stalled the signing of the pact.  The agreement has been ready for signing after undergoing translation into the EU official languages and Kiswahili. However other regional partners developed cold shoulders, with Tanzania particularly distancing itself from it. The signing of the EPA was scheduled to happen on July 18, 2016, in Nairobi during the United Nations Conference on Trade and Development.

However, this failed to materialise with some EAC partners requesting not to sign then. Having re-based its economy, Kenya is the only country in EAC that is ranked as low-middle income and therefore the only one that will suffer high tax regime if other EAC members do not sign the new pact. The Government has been undertaking high-level bilateral consultations with EAC geared towards agreeing on alternatives for signing the EPA over the past three months. This matter is also part of the agenda of the EAC Summit that is set for early next month. Failure by the EAC members to collectively sign and ratify the Economic Partnership Agreement with the EU is expected to impose tariffs of between four and 22 per cent on Kenyan exports by October 1.

The taxes have already sent jitters among Kenyan exporters who are weighing between reduced margins or lost market share. Tanzania cited the decision of Britain to leave the EU as its reason for walking out of the regional trade agreement. Brexit, as it is informally known, had also presented fears in Kenya but the impact is minimal, according to CBK Governor Patrick Njoroge.