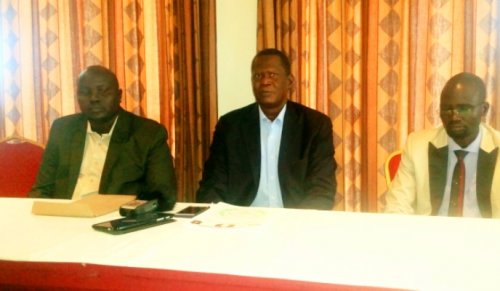 JUBA  A top army General in the South Sudan’s national army, the Sudan People’s Liberation Army (SPLA), has resigned from the government, accusing President Kiir and his inner circles of violating the peace agreement and wanting to take the country back to war over the creation of illegal 28 states.

Lt. Gen. Bapiny Mantuil Wichjang, the Deputy Chief of General Staff for Moral Orientation in the South Sudanese national army and also a brother to the current Governor in the oil rich Unity state, Nguen Mantuil Wicjang, declared his resignation in a press statement he issued from the Kenyan capital, Nairobi.

“With heavy heart, I have decided to tender to your Excellency my resignation as SPLA D/COGS [Deputy Chief of General Staff] for Moral Orientation…,” said Lt. Gen. Bapiny in the statement, dated 7 October, a copy of which Sudan Tribune obtained.

The army General who was the most trusted top army commander representing the forces of Bul Nuer allied to President Kiir’s government and control most of the government-held areas in the oil rich state, said he was accused by his own brother, Governor Nguen, and the President of rejecting the creation of the 28 states.

In his statement, Lt. Gen. Bapiny said he clearly stated his opinion to the president in the past that the creation of the 28 states was a clear violation of the August 2015 peace deal signed with the opposition group led by Riek Machar.

He accused the president and the Jieng [Dinka] Council of Elders (JCE), an informal Dinka tribal advisory body composed of Dinka intellectuals and senior politicians from across the Dinka inhabited states, of taking lands away from other communities and giving it to the Dinka communities in Upper Nile and Bahr el Ghazal regions.

As a result, while on a trip to Germany for medical treatment in March this year, he said the Chief of General Staff, Paul Malong Awan, ordered that his residence be searched and bodyguards disarmed.

“On the 24th of March 2016, the Chief of General Staff ordered a search into my private residence and a force comprised of military police and MI [Military Intelligence] personnel came and disarmed my bodyguards and the security of the residence was reduced to zero because all the guns were taken away,” Lt. Gen. Bapiny narrated in the statement.

“He [Malong] did that because on the 14th of March 2016, Nguen the Governor of Unity state lied to them that I was going to declare my intention to join the opposition or SPLM-IO once in Nairobi. I was already in Nairobi on my way to Germany before the 24th and the declaration never happened because it was a wild lie fabricated by both Tut Gatluak [Presidential Advisor on Security Affairs] and Nguen [Governor],” he said.

The resigned General Bapiny, who was also an insider in the security plans also revealed that there was a suggested plan by the government to assassinate Taban Deng Gai, the newly appointed First Vice President while he was leading opposition’s advance team to Juba in February this year.

He revealed that he personally received a copy of a joint written recommendation from his brother, Governor Nguen Mantuil and the presidential advisor on security affairs, Tut Gatluak, to President Salva Kiir to assassinate Taban Deng.

He also said the leaked document recommended that he, General Bapiny and General Stephen Buay Rolnyang and another General Manyuat, all from Bul Nuer, be arrested.

“On the 29th of February 2016, I obtained a report that was written to the President by the Presidential Advisor Tut and Governor Nguen with the recommendation that Taban Deng Gai (who had just come to Juba with the advanced team of SPLM in Opposition) should be assassinated and Maj. Gen. Buay, Maj. Gen. Manyuat and myself to be arrested,” he revealed.

In March, a month after the leaked report, he said the two Generals Buay and Manyuat were actually arrested by the government, while he [Gen. Bapiny] was in Germany for the treatment.

However, there was no assassination attempt on the life of Taban Deng, probably because the President did not act upon the alleged recommendation.

General Bapiny in the statement said he would from now on join “his people” to free them from the regime of President Salva Kiir without indicating if he would joint the armed opposition or not.

General Peter Gatdet Yak, another opposition General, is also from the Bul Nuer clan.He defected from the opposition led by Machar, but he is purportedly considering to rejoin Machar’s opposition faction to topple the government.

Also opposition’s officials claim that General Bapiny, may join them.