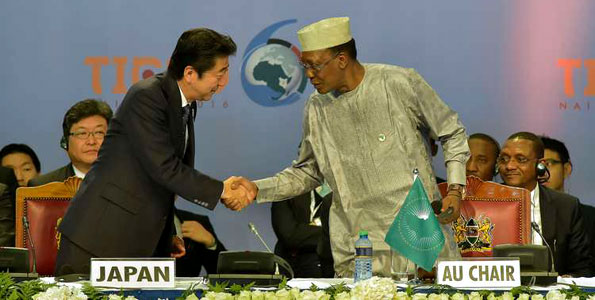 Kenya is expected to sign a financial assistance agreement worth $9.98 million for geothermal power projects.

Uganda’s President Yoweri Museveni is expected to have a sideline meeting with Prime Minister Shinzo Abe with the discussions to centre on infrastructure projects.

A statement from Japan’s foreign ministry said that discussions will also include investment promotions that will see more Japanese companies encouraged to establish businesses with Uganda, based on public-private partnerships.

Kenya’s energy deal, to be signed by Kenya’s President Uhuru Kenyatta and Prime Minister Abe, will go towards financing the sector and providing technical assistance.

The deal is part of Tokyo’s $200 billion infrastructure loans, which it announced mid this year for geothermal projects that have reached the construction stage.

The Kenyan deal will see Japan International Cooperation Agency (JICA) offer the funding through low-interest loans to cover a portion of pre-construction stage costs, which can run up to $100 million.

Kenya has Africa’s biggest concentration of geothermal power capacity mainly located in the Olkaria area of Naivasha and Baringo.

Japanese firms Toyota Tsusho and Toshiba already won a 2011 contract for geothermal power facilities in Olkaria and are in the middle of constructing these facilities.

Kenya’s Mining Minister Dan Kazungu will also sign a memorandum of understanding with the Japan Oil and Gas Metals National Corporation on remote sensing technology within the mineral resources field.

Kenya is also expecting to sign an agreement with Tokyo for the promotion and protection of investment. The agreement will be signed by Japan’s Minister for Foreign Affairs Fumio Kishida, and Kenya’s Cabinet Secretary for National Treasury Henry Rotich.

In health, the Kenya Red Cross Society will receive a hi-tech mobile health clinic from Toy Factory International Company to support the delivery of health services to the most vulnerable communities living in hard to reach areas in Kenya.

Nigeria’s special adviser to the president on media and publicity, Femi Adesina said his country will be signing an MoU on health and infrastructure development, followed by a meeting between President Muhammadu Buhari and Prime Minister Abe.

Mauritius will also be getting additional funding from Japan for its meteorological observation system. Japan is currently providing substantial support for the installation of a Meteorological Doppler Radar System, which is expected to be complete later next year.

Botswana is also expected to firm up its agreement with Japan’s Marubeni over the $800 million 300,000kW Palapye plant. The country will also sign an MoU with Japan with a focus on the health and agriculture sectors.