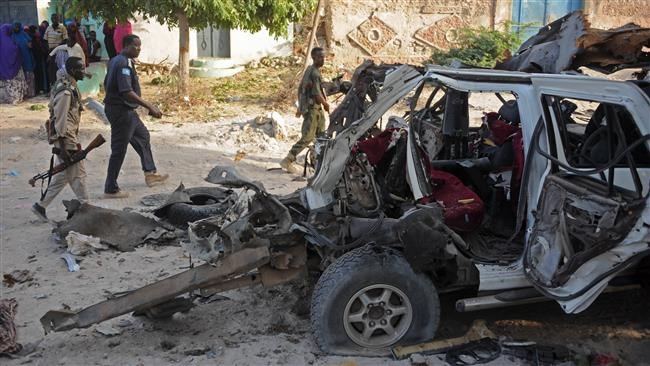 According to a Somali police official, two civilians were killed on Monday during a drive-by shooting by the Takfiri group in central Mogadishu. One al-Shabab militant was also killed in the incident.

The gunman “was killed by police after he killed a civilian. Another civilian was killed after the car the assailants were riding in detonated,” said police official Ibrahim Mohamed.

The third civilian victim died later of gunshot wounds sustained in the firing.

Officials said the assailants’ car blew up near a market located in the Yaqshid district of northern capital, adding that two militants involved in the shooting are on the run.

“I saw the dead bodies of a woman and one of the gunmen who was riding in the car. He was shot after exchanging fire with police. Their car exploded after they abandoned it during the fighting,” said a witness in the area.

Somalia has been the scene of militancy by al-Shabab since 2006. The Takfiri terrorist group has been pushed out of Mogadishu and other major cities by government forces and the African Union Mission to Somalia (AMISOM), which is largely made up of troops from Ethiopia, Uganda, Burundi, Djibouti, Sierra Leone and Kenya.

Al-Shabab, which pledged allegiance to al-Qaeda in 2012, has been behind violence and chaos in Somalia, targeting key government and security figures in the capital, and elsewhere in the country.