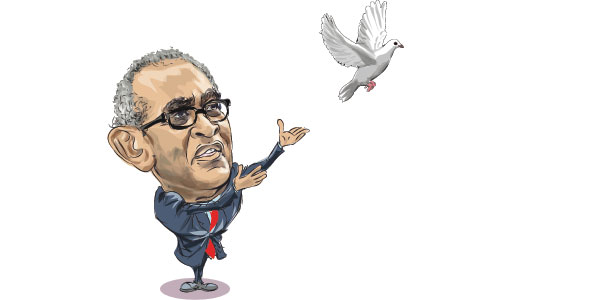 NAIROBI (HAN) June 23.2016. Public Diplomacy & Regional Security News. By Salim Ahmed Salim. In every country and every continent, the quality and contribution of leadership in government is critical. It is presidents and prime ministers who have the responsibility of assessing the risks, choosing the correct priorities for their country and focusing national efforts to ensure they are delivered.

Get these decisions right and a country and its people can move forward no matter what obstacles are in their way. Get it wrong and, despite commitment and hard work, progress will stall or go into reverse.

But the importance and contribution of executive leadership is, in many ways, far greater in Africa. The continent’s problems are, after all, so much more severe and complex. Even a global challenge such as climate change is already having a more damaging impact on Africa than other regions.

The continent’s leaders have to meet these problems with far fewer resources than their counterparts in wealthier countries have at their disposal. They also lack the institutional support on which their counterparts elsewhere can rely.

The absence of mature well-functioning institutions or a strong democratic culture makes leadership much harder and the achievements of those who rise above the challenges are all the more remarkable.

This was the background against which the Mo Ibrahim Prize for Achievement in Leadership in Africa was established in 2007. By highlighting exceptional leadership, our aim was to provide role models for the qualities needed at all levels of African societies.

The award itself was also intended to provide the means for those honoured to continue their contribution to their continent once they had left national political office.

Retired leaders outside of Europe and North America rarely have the generous pensions or well-paid directorships that give them the freedom to subsidise public duties.

Having funded the prize through his foundation, Mo left the decision of whether, and to whom, the prize should be awarded each year, to an independent committee on which he does not sit nor attempts to influence.

The committee, which I now have the honour to chair, meets regularly during the year as we did again last week to consider potential candidates tor the 2015 award.

It was, in fact, our 10th conclusive meeting, which is a good time to take stock of what’s been achieved in the past decade. What is clear is that the prize has been successful in focusing attention on and stimulating debate about the importance of leadership in Africa. It has also provided the platform, as was hoped, for outstanding individuals to continue their invaluable work in public life.

President Pedro Pires of Cape Verde, the 2011 Laureate, has used the prize to set up an Institute for Leadership to give young leaders the capability to drive development in Cape Verde and across Africa.

The 2008 laureate, then president Festus Mogae of Botswana has brought high-profile African figures including the 2007 laureate former Mozambique president Joachim Chissano and the 2014 Laureate former Namibian president Hifikepunye Pohamba together in Champions for an HIV-Free Generation to press for effective solutions to the disease.

Both presidents Chissano and Mogae have also been active in mediating conflicts and disputes, notably in Madagascar, northern Uganda and South Sudan. All are involved in promoting strong governance in Africa.

But any reflection on the past decade also reveals confusion over how the committee comes to its decision and the criteria we use. An indication of this is how on those occasions when the committee decides not to award the prize, as happened last week, our decision is seized on as indictment of the poor standards of leadership on the continent. This is a misunderstanding of the scope and purpose of the Ibrahim Prize.

From the very beginning, the bar set for the prize has been extremely high. It recognises not good leaders – of which Africa has many – but truly exceptional figures who, by their nature, are rare indeed. So it is not surprising that there are years when the prize is not awarded.

When we make our decision, the committee draws heavily on the first-hand experience of the unique challenges of political leadership of our members, in Africa and beyond. This allows us to assess excellence in leadership against the diversity of national challenges.

In some case, this may be – as in the example of president Chissano, the first Ibrahim Laureate – the role played in healing the divisions of a country torn apart by civil war. In other cases, as was the position with president Mogae, the second laureate, it is keeping a country’s progress on track in the face of unprecedented challenges.

What connects all the laureates is the transformative impact their leadership had on their country and on their people. We expect candidates, through their leadership, to have left a very strong legacy with their country, including its democratic culture, in a far better state than when they took office. It goes far, far beyond requiring leaders to step down willingly at the end of their constitutional term.

There have also been complaints that by limiting the prize to such a narrow group of solely political leaders, the contribution of those in civil society or business, for example, is being dismissed or denigrated. This again is simply not true. All board and prize committee members are aware that the success of a country and society depends on the efforts of many people and many leaders.

But we also believe that without leadership at the top in government, these efforts will not reap the rewards they deserve. This is why the Ibrahim Prize focuses on political leadership.  And it is, of course, always open to others to recognise the contribution of others in national life.

As Mo has said, he never intended this prize to have a monopoly of celebrating good leadership. The greater the focus there is on leadership in all sectors and at every level, the faster we will see progress in Africa.

Dr Salim Ahmed Salim, a former secretary general of the Organisation of African Unity, is chair of the prize committee for the Ibrahim Prize for Achievement in African Leadership. The committee’s decision not to award the prize this year was announced on Thursday June 16