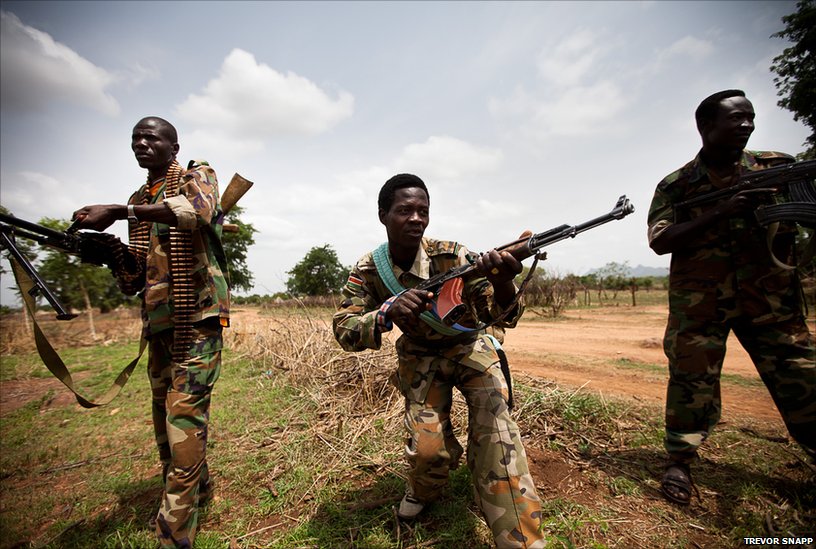 The civil war has now displaced as many as one million people, many of whom are at serious risk of malnutrition, but Bashir has banned everyone from international NGOs and humanitarian aid to demining companies and journalists from the area.

Macrae traveled illegally, overland, across the border from South Sudan, a difficult route made even more challenging by the rainy season. “Khartoum believes the inaccessibility of this area is why it can get away with what it’s doing, without the world noticing,” says Macrae.

Macrae last visited the Nuba Mountains five years ago, just as the war started and South Sudan was about to achieve its long-awaited independence.

“The people of South Kordofan and the Blue Nile had fought with the South, but remained in the north after partition,” says Macrae. “They had been promised consultation on their future – but instead Khartoum launched a pre-emptive war, attacking both civilian and military targets.” 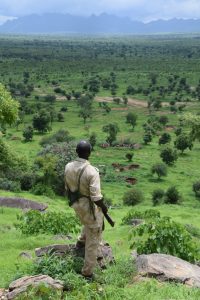 Macrae returned because of reports that the war had reached a critical stage. “There is a tense military standoff, while negotiations for peace are on a knife-edge,” he says. “The Sudan Peoples’ Liberation Movement North and its army (the SPLA-N) controls four key regions in South Kordofan. The rest are mostly held by the Sudanese Armed Forces (SAF).”

Khartoum announced a unilateral cease-fire the week before Macrae arrived, describing it as a chance for the rebel SPLA-N “to join the peace process and surrender their arms.”

The people in South Kordofan and the Blue Nile dismiss this, saying fighting usually stops anyway in the rainy season when government forces are unable to move.

Local community leader Kukuandi Kalo believes that Khartoum’s real aim is to maintain its occupation of key farming areas like Al Azarak in the north, cutting off the food supply while preventing humanitarian access to other rebel-held areas. Unless Khartoum lifts the blockade on humanitarian aid, he says, any ceasefire is meaningless.

Suliman Jobona, deputy governor of South Kordofan, says Khartoum is now using denial of aid as a weapon of war. “Whether you are Muslim or Christian or whatever, you are targeted equally. They are denying food; they are denying medicines and education. Everything they are denying. People are dying from malnutrition and people are suffering but nobody is caring about that.”

He feels abandoned by the international community. “They’ve left and they’re even not talking about us….”

That sense of betrayal was heightened three months ago when the European Union granted Bashir’s regime one hundred million Euros to “tackle instability and the root causes of irregular migration.” It’s a decision that mystifies locals, given that Bashir’s wars have created so many refugees.

As Kalo says, “How do you support someone who is wanted by the International Criminal Court because he committed crimes against humanity in Darfur? And the killing of people in the Nuba Mountains and Blue Nile is still going on – but he is still getting support from the European community?”

Macrae finds evidence that civilians are still being targeted by the SAF.

For example, three unexploded bombs surround the rural hospital in Kauda. “It was a miracle that none of them exploded, but in a sense the damage is almost as serious,” Macrae says. “They’ve had to abandon the hospital.  There are no military targets here – there is no excuse for this bombing – and the effect of this bombing goes on.”

Macrae also visits the area around the village of Karkarai, destroyed during a SAF raid. As a local who escaped tells Macrae, “When we go after one day, we find all of them. They are burnt.  Even we can find one leg there…. You can find a head. You can find part of the body.  You find very, very bad things. There are many.”

In Hieban district, Macrae talks to Fatana Kodi and Abduraman Alom, who watched Antonovs blow up their four young children and two friends two months ago. “There were bodies everywhere,” Abduraman says. “Children with broken skulls, with eyes blown out. Corpses everywhere.”

A Sudan government spokesperson told Al Jazeera the SPLM/A North in South Kordofan and the Blue Nile is simply “a branch of the Sudan People’s Liberation Movement (SPLM) that misrules South Sudan” and that “arms and salaries are transferred through the porous border.”

However, the SPLA North’s commander-in-chief, Major General Jagod Marada, insists the SPLM North has no desire to be part of South Sudan but rather seeks equality and self-government within a democratic Sudan.

“The government is waging this war against us and all we are doing is to defend ourselves,” says Marada. “We are defending our citizens and our lands. We will continue until we achieve our goal, which is to change the government and build a new system in a new Sudan, one which every Sudanese citizen can be proud of.”

With South Sudan on the brink of its own civil war, there are fears that South Kordofan will become effectively cut off, giving Khartoum complete control over any humanitarian access.

The War The World Forgot premieres on Al Jazeera English at 2230GMT on Wednesday, 24 August 2016 as part of People & Power, Al Jazeera’s weekly investigative programme that looks at the use and abuse of power.