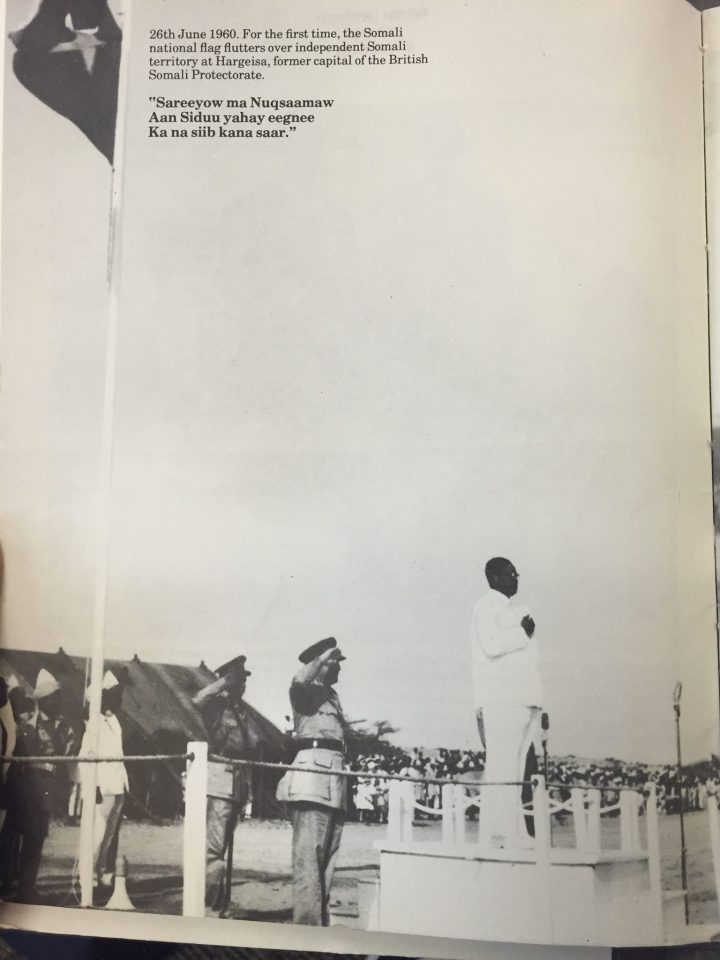 OTTAWA (HAN) May 15. 2021. Public Diplomacy and Regional Stability Initiatives News. Monitoring Regional Issues. OPINON BY: Dr. Suleiman Walhad. Kenya was a creation of the British Empire, when it became a colony in 1920, gaining independence in 1963, while Somalia is a creation of the Somali people when the two parts of ex-British Somaliland and Ex-Italian Somaliland joined in a union in 1960. Historically one is colonial creation while the other is a creation of its own people and hence the background clearly explains partially the enigma of the complex love and hate relationship between the two states, where on the one hand one is clinging to some colonial structure while the other wants to preserve its patrimony.

Part of the Somali patrimony is still included in the colonially constituted Kenya, which the Somali people always wanted to recover. The North Frontier District of Kenya, an area of 127,358 sq.km and a 170km stretch of almost straight coast, was and is a Somali space and the Somali attempts to recover those lost lands and seas remain and will remain a major source of conflict between the two countries, explaining one of the mysteries in the relationship of the two countries.

The collapse of the Somali State in 1991, which continued up to 2012, has given Kenya not only a respite from the Somali struggle to recover its lost lands and seas but also an opportunity to work on Somalia along with others to ensure it never recovers its old muscle as a strong nation, which may threaten Kenya again.

“Attack is the best defense” is a proverbial expression denoting that a pre-emptive strike is the best defense of oneself from a potential enemy and Kenya has come up with a strategy that a claim of a part of the Somali sea would enable it to ensure that Somalia gets busy defending its sea instead of claiming the Somali lands and sea which to date remain part of Kenya, despite a referendum in 1963 where some 87% of the population showed their will to join their brethren in Somalia, but which unfortunately was denied by colonial Britain and continually denied by Kenya. It is one of the enigmas in the Somali Kenya conundrum.

Kenya has raised the stakes of its territorial dispute further by putting and including a new uncalled for claim on parts of the Somali sea through a manipulation of some of Somalia’s weak leaders during the absence of a proper Somali government in the two decades of Somali decadence. Creating a maritime dispute between the two countries’ maritime borders. Such a dispute did not exist for over some 50 years when the two countries co-existed and struggled over the Northern frontier District of Kenya. The deliberate malintent on the part of Kenya with respect to its manufactured maritime dispute is another enigma in the Somali Kenya conundrum.

Kenya is largely an agricultural country and its income is derived, in the main, from agriculture, in addition to its tourist industry, which has waned in the recent past through the rise of terrorism in the region. The agricultural production of Kenya includes the growth of the “Qat Mira” in the Meru region of Kenya, a drug that is generally consumed by many communities in the East and Horn of Africa and even West Asia. It reportedly used to make Kenya earn some US$ 1,000,000 daily and add it to the Kenyan economy i.e. over US$ 365 million annually. Somalis are generally one of the major consuming societies of this mild drug as part of their recently imported cultures from the neighboring countries of Kenya, Yemen and Ethiopia as it was not in the Somali culture before the 1950s.

The ongoing Corona virus pandemic has forced some of the countries in the region to curtail the trade and consumption of Qat, some more so than others. Somalia is one of those countries that limited the import of Qat from Kenya and this has infuriated it so much so that Kenya is struggling on how to pressure Somalia to ease the restrictions of Qat imports from Kenya. The loss of a huge income from the Qat business is another enigma in the Somali Kenya conundrum. They totally ignore that the drug is detrimental to the health of many of the populations of the Horn of Africa, including Kenyans?

The Horn of Africa has not appeared in the past as an energy source, but lately, many of the countries of the region as far south as Mozambique have shown promises of potential oil and gas deposits both onshore and offshore. This has given rise to the fear that this huge potential may come with the associated curse of corruption, civil disruptions and wars between countries and the resultant disgraceful poverty instead of riches, migration and refugees, disease and malnutrition.

The case seems to be building in the Somali Sea bordering Kenya, where Kenya has made claims and Somalia has rejected such claim. It is now referred to as a “longstanding maritime boundary dispute between the two countries” by some people when this was initiated only in 2014, barely seven years ago through a court case, wherein Somalia sued Kenya in the International Court of Justice for unlawful operations in its maritime territory. The illegal maritime operations refer to exploration of oil and gas in Somali territorial waters by energy companies such as Ente Nationale Idrocarburi (“ENI”) of Italy and France’s Totale through contracts they signed with Kenya. This is another one of the enigmas in the Somali Kenya conundrum.

The competition between the neighbors of Somalia on Somalia is another matter, which perhaps deserves to be mentioned. Ethiopia and Kenya have always been on the same side when it comes to disputes with Somalia due to what they used to refer to as “Somali Expansionism” and what Somalis used to refer to as “Recovery of the lost lands and Seas”, but lately the relationship of Somalia with Ethiopia has improved and both Ethiopian and Somali populations have recovered from the intense antagonisms created by the old regimes of the two countries, and Kenya feels it was left out in the cold, which has forced it to align itself with Djibouti or Ex-French Somaliland, one of the territories in the Somali space, that Somalia would like to rejoin the fold but which, for some unknown reason, Djibouti or Ex-French Somaliland, is wary of. Somalis in general have reconciled themselves with the fact that changing of borders at this historical instant is not feasible and most indigenous Somalis in Ethiopia, Kenya and Djibouti are satisfied with being citizens of those countries. The Kenya government continues the old antagonistic relations it had with the Somali people, including even its own citizens of Somali origin, except for the sellouts. A realignment of the IGAD countries, perhaps also maneuvered by forces beyond the region, is under process where a stronger relationship between Ethiopia, Somalia and Eritrea is growing and Djibouti and Kenya are being left out of the equation. Somalis own the Northern Frontier District of Kenya, which is roughly a third of the country and the consecutive governments of Kenya including the present one have always neglected this region. The authorities of Kenya have generally viewed the indigenous Somali with suspicion if not outright hostility lest they side with Somalia should Somalia claim the NFD space – another enigma in the complex Somali Kenya conundrum.

Since the collapse of the Somali central government in 1991, Somalis have migrated to far and wide. At present they live in some 144 countries of the world’s 196 countries, that is, some 73.5% of the world. They have literally become world citizens, more so in Kenya and Ethiopia, where there already exist huge indigenous Somali populations. Somalis are by nature enterprising and they have set up businesses in most of the countries they have settled including Kenya, where they have set up a flourishing business including but not limited to real estate, distribution of fuels, transportation, trade, telecommunications and financial services. Many of the high-rise steel and glass buildings that dot Nairobi are indeed owned by Somalis and Kenyans are not comfortable at all with the subtle Somali takeover of their capital and they can do very little about it. This internal dislike of the wealth of Somalis by Kenyans of non-Somali origin is another enigma among the many others that contribute to the conundrum.

And finally Somalia’s election process, which is not only a Somali affair but also the affair of many foreign parties, including Kenya, who would like to shape the outcome of the process for their own varying and differing goals, is another hindrance. With Kenya interfering directly in the internal affairs of Somalia, another dimension has been added to the already difficult relationship between the two countries, which share not only a long boundary but also people on both sides of the boundary and hence many other interests. This strains the relationship between the two countries and adds to the already complex relationship between them and compounds the conundrum.

Kenya’s Operation Linda Nchi (Swahili: Linda Nchi; “Protect the Country”) of 2011 was completed in 2012 when its forces in south Somalia were included finally into a legal presence through AMISOM, the African Mission of Somalia. The Kenya Defence Forces presence in South Somalia was designed to create a buffer zone in Somalia purportedly to defend the country from Al Shabaab but was actually meant to ensure creation of a client state in the fractured Somali governance system. It is how the Jubaland State of Somalia was created covering the lands bordering Kenya and perhaps also helping Kenya’s maritime claim. It was meant to push back the Somali government’s ownership of its own sovereign territory. It helped and encouraged Djibouti to join the neighbours, who all now have military presence in Somalia. This explains another of the enigmas in the Somali Kenya conundrum, where now all the opposition parties of the government of Somalia seem to have rear bases in Kenya, and where they are serviced, facilitated and financed by the government of Kenya and others, thus adding to the many enigmas in the Somali Kenya Conundrum.