Home Somalia The Somali American Ranger, 'We will keep this nation together' 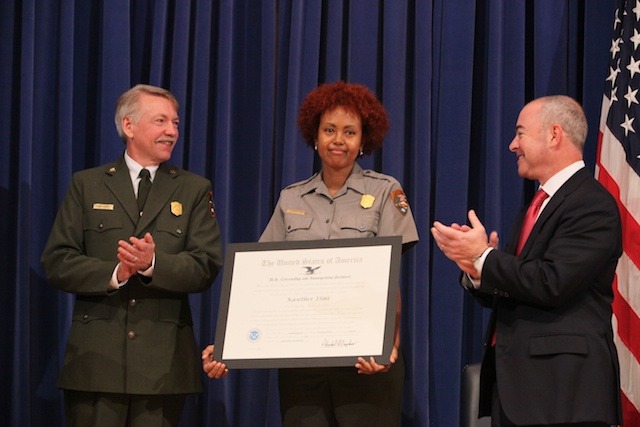 New York (HAN) May 8, 2014.  Opinion Contributed By Elmi and Edited by Geeska Afrika Online Staff. The Somali American Ranger Elmi said, We will keep this nation together, and we will work out our problems within it; the United States’ existence is far more important. 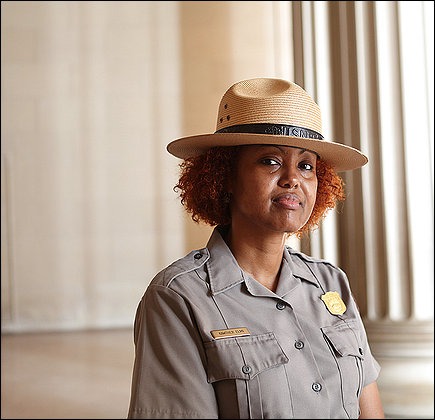 Biggest challenge: Elmi had one of the steepest learning curves of all new park rangers who interpret U.S. history, having grown up in Somalia. She came to the United States in 1982 at age 22. But her job — and the job of all park rangers  is to read and study, making sure that she will not be stumped by questions.

Quote: “Sometimes people ask questions and rangers look up answers and connect them to other things that reflect our times or our history, even where the trees come from. You couldn’t fall down on the national Mall without hitting history.”
I feel very grateful that I came to a country that is rich in many, many ways. And the agency I work for takes care of those riches. In our park you’ve got Washington, and Jefferson, you’ve got Vietnam, you’ve got World War II, almost all of America’s history. But I love the Lincoln Memorial best — the idea of respecting equality, and the way we have gone to war to make that more real. We are the nation that perfected democracy by going to war with itself. Lincoln said: We will keep this nation together, and we will work out our problems within it; the United States’ existence is far more important.

It’s hard not to be humbled by a human being just like yourself, having done so much and done it for everyone — and especially for me.

I’m from East Africa, Somalia, and I came to the U.S. to go to college. I just had this intuitive sense about the U.S. I thought: I like their attitude. When I came, Somalia was still functioning to a certain extent — it didn’t fall apart completely until the 1990s. But some of the symptoms were already there: a lot of deep-seated resentment, mistrust from the people, and inflation — just the normal falling apart of a nation where people didn’t feel safe and couldn’t afford the basics of life. It was the failure of a system that was kind of teetering for some time and finally just collapsed, imploded.

So I try and think about what these monuments and memorials stand for. What if George Washington had said, “You know what? I’m president for life. I like this job.” He was so very important to the start of this tradition of peaceful exchange between two administrations, setting an example of what kind of government we are because our president is not a monarch for life. And he’s not the only one. There are many, many people working hard because they believe that it’s good to take care of your people, it’s good to take care of your country.

The other day we were working at the C&O Canal, and I found out about Montgomery Meigs, the man who built the aqueduct for D.C. with the Army Corps of Engineers. It was just so incredibly empowering to realize a man who worked for the federal government, a civil servant, that his water, the water that he put in place, still feeds my house today. And it’s a system that’s 150 years old. I like that. I like that you build a system that works; and it works today, it works tomorrow, it works for everybody. Interview by KK Ottesen