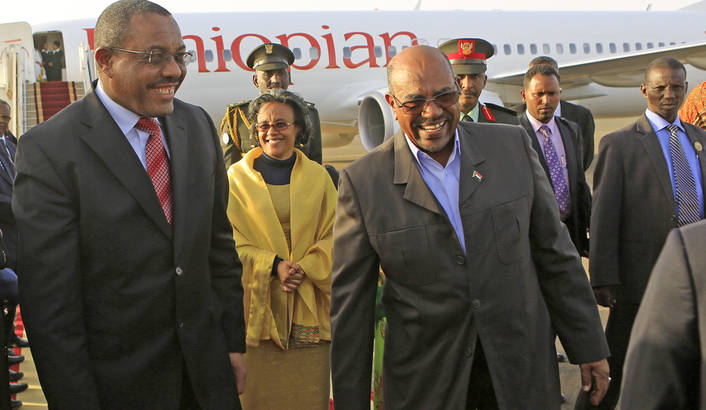 Khartoum (HAN) April 30, 2014 According to the World Bulletin, Sudanese President Omar al-Bashir on Monday praised a series mega projects being implemented in Ethiopia, saying it would pave the way for “the new Ethiopia.”
Addressing Intellectuals’ Forum on Ethiopia’s Grand Ethiopian Renaissance Dam (GERD) in the lakeside town of Bahir Dar, 578km northwest of Addis Ababa, al-Bashir said Ethiopia’s fast-paced development also benefits Sudan, according to  Kebede Kassa event coordinator. The event’s main theme focuses on how best Ethiopia can maintain sustainable utilization and management of the Nile water, as well as the role of governments, African organizations and scientists of riparian states to deepen Nile riparian cooperation.
“Ethiopia and Sudan have historical relations that date back to many years and Ethiopia’s development is also seen as a step forward for Sudan,” he quoted al-Bashir as saying.
The two-day forum brought together local prominent intellectuals and professionals to discuss the legal rights of Ethiopia to use the Nile water to built Electricity Dam.
Ethiopian State Minister for Foreign Affairs Berhane Gebre-Christos, who also attended the forum, said Ethiopia is keen to see active participation of intellectuals in promoting the country’s legal rights in Nile water.
Participants include water experts, representatives from all government universities, senior officials of the federal and regional governments, lawmakers, civil activists and political figures, among others.

The Ethiopian State Minister for Foreign Affairs Berhane repeated Ethiopia’s call that the international community should now do more to keep up the momentum in Sudan following the recent progress in engagement between South Sudan and the Republic of Sudan, with the re-start of oil production, the visit of President Al-Bashir to Juba and to stop civil war in South Sudan.
Berhane Gebre-Christos stressed the importance for regional unity in order for the international community to fully support the overall cause of Sudan.

The use of Nile water has led to tensions between Ethiopia and Egypt, which fears that the GERD could threaten its share of the Nile River, its main source of water. Ethiopia, however, says the project is indispensible for its own economic development, asserting the project won’t harm Egyptian interests.

Initially, When Ethiopia dam project  first announced plans to build a massive hydroelectric plant on the Nile River, Egypt and Sudan were horrified. For both nations, the Nile is their lifeblood – without it, neither would be able to grow food in the quantities necessary to support their populations.
Their fears, however vociferously expressed (especially in Egypt, which at one stage threatened military action), were not enough to halt construction on the project, which commenced in May this year. As well having geography on its side – the Nile water flows through Ethiopia before it gets to Egypt or Sudan, and no amount of sabre-rattling can alter that fact – Ethiopia recruited all the other upstream nations to its cause under the banner of the Nile Cooperative Framework Agreement (signed by Ethiopia, Burundi, Kenya, Rwanda, Tanzania and Uganda).

This was a diplomatic coup that left Egypt and Sudan looking lonely and vulnerable, and with little choice but to accept the new arrangements.

When finished in 2017, the dam will have a 6000-megawatt production capacity, according to the Ethiopian government sources.

Ethiopian strategy is the dam will benefit downstream states Sudan and Egypt, both of which will be invited to purchase the electricity generated by the Dam.