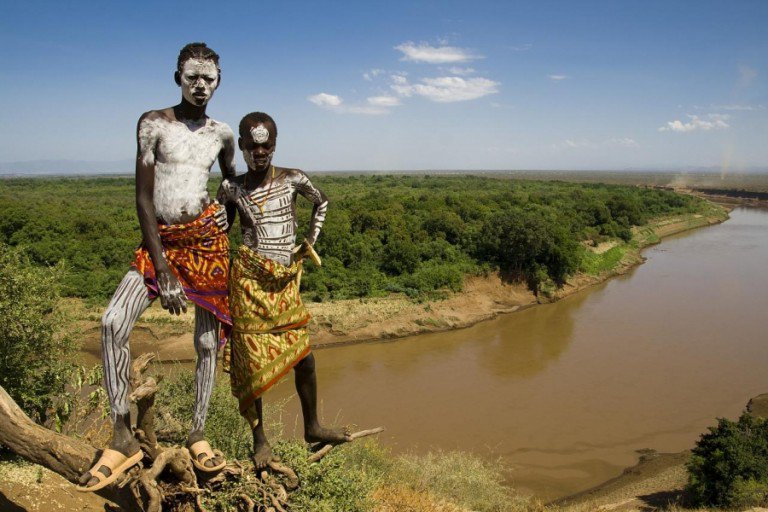 ADDIS ABABA (HAN) April 12. 2016. Public Diplomacy & Regional Security News. By: Narissa Allibhai. The diverse indigenous ethnic groups of Ethiopia’s Omo Valley may have made it past severe threats to their survival during decades of occupation by Emperor Menelik, but the current land grabs for industrial plantations, spurred by construction of the Gibe 3 Dam, may spell the end of life as they know it, according to Will Hurd, Omo Basin researcher, activist, and director of small NGO Cool Ground.

In his recent paper “Surviving the Second Conquest: Emperor Menelik and Industrial Plantations in Ethiopia’s Omo Valley,” Hurd describes two conquests of the Omo Valley, the first from 1896 to 1936, and the ongoing one that started discreetly in 1996. He begins by outlining the importance of the Omo Basin, which is believed to be the origin of humankind, and is home to unique indigenous ethnic groups whose traditional livelihoods are attached to the land and annual flooding of the Omo River.

In 1896, after the Italians tried and failed to seize Ethiopia, Emperor Menelik took over southwest Ethiopia in order to keep it out of European hands. Thus followed a series of trials and tribulations for the tribal peoples of the Omo Valley, who had long been out of reach of the settled society of Ethiopia’s highlands. The rinderpest infestation of cattle that was introduced by the Italians devastated pastoralist Africa. The subsequent tsetse fly infestation and associated sleeping sickness spelt death for humans and cattle. Menelik’s troops added to the lethal effects of the epidemics, and not all ethnic groups survived to tell the tale. The slave trade for domestic and Arab markets, especially of farmers in the region, led to more turmoil and disruption, forever changing the area’s dynamics. This turbulent period came to an end in 1936, when the inhabitants of the Omo Valley were left alone once more.

In 1996, the Ethiopian government quietly commissioned the Omo-Gibe Basin Masterplan, whose principal components included the construction of a large dam for both energy production and to facilitate irrigated agriculture. The world knew nothing of this mega-dam until major construction since 2006 of the dam that would come to be known as Gilgel Gibe III. The dam has a planned hydropower capacity of 1870 MW and will disrupt seasonal river flows, but of greater concern are the associated sugar plantations that could consume up to 50% of flows that will never reach downstream. Despite international outcry over environmental and human rights concerns, construction of Gibe III continued apace and the reservoir began filling last year.

The land in Bodi after clearing for a plantation
Cool Ground

One year after completion, effects of the dam are already being felt: the annual floods (necessary for flood-recession agriculture and fish breeding cycles) have stopped. Land has been taken from local people and national parks, inhabitants of the land have been forcibly resettled, and food insecurity and extreme hunger has begun to set in. This is just the start of troubles to come. The Omo River provides Kenya’s Lake Turkana with 90% of its water. It is predicted that abstraction of water for the plantations could cause the lake level to fall by up to 22m. Fish numbers will dwindle and the lake’s water will be completely undrinkable. These events will exacerbate resource conflicts among the local communities.

Solutions to this unfolding disaster are difficult, but Hurd and anthropologist David Turton have a few suggestions for the Ethiopian government:

The local people have taken the lead in starting off initiatives that accommodate various interests. They have been trying to develop a Community Conservation Area (CCA) and tourism project since 2008, integrating conservation and tourism. However, government approval is essential for this project to succeed. There is potential for compromise and arrangements that can be mutually beneficial. As things currently stand however, unless something drastic is done, “there seems little hope of the local ethnic groups recovering from this second conquest of the Omo Valley, as they did from Menelik’s conquest of 100 years ago.”