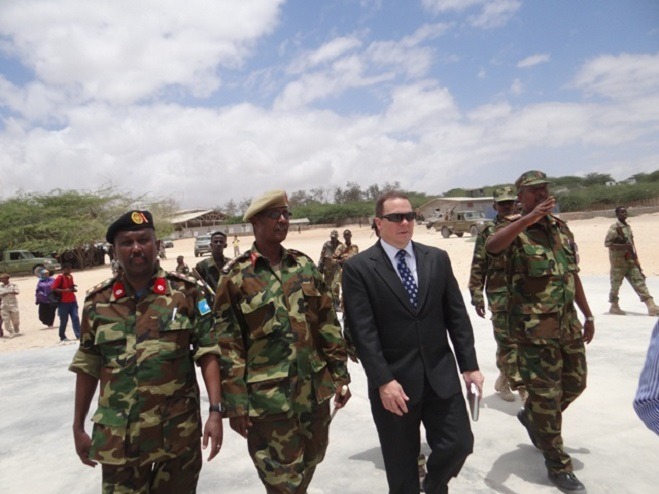 Mogadishu (HAN) March 6th, 2014 – Abdirahman Duale Beyle, Somali minister for foreign affairs and international cooperation, told the Security Council there were assassination attempts made against the nation’s president recently. This, the minister said, was an indication of the weakness of national security forces to contain peace and stability.
“We are a country in a serious war,” Minister said.

The Somali minister of foreign affairs complaining of lingering war, therefore, the U.N. Security Council has authorized suspension of an arms embargo, in order to re-enforce legitimacy of the Federal Government. The Security Council, led by the United States of America adopted a resolution in a unanimous vote to lift the arms embargo on Somalia until October 25th, 2014. The HAN & Geeska Afrika Online Reporter in Mogadishu Confirmed this week that, The United States’ Central Intelligence Agency has provided arms this week to the Somali forces (Photo, Halane Compound in Mogadishu).

Gen.Dahir Aden Elmi (Indhaqarsho), the commander of Somalia Armed Forces officially took over military vehicles and other defencive military equipment dedicated to equip Somali elite forces with the newly recruited and trained Somali forces at the Al-Jazeera Military Training Camp in Mogadishu, Somalia. “This is the first part of series of support from the U.S government and other international partners.” Gen Elmi said.

The newly Military trained soldiers will be the country’s first commando and will be transferred to former Air Forces Base in Bali-Doogle, led by Col. Hassan, a Somali-Canadian.

The Somalia minister said the Federal government wanted the arms embargo lifted completely. Somalia will give U.N. monitoring groups advance notice of deliveries and submit written confirmation within 30 days of delivery for arms used for the development of the country’s national security forces.

Al-Shabaab, a militant group with ties to Al-Qaida, targeted the presidential compound in Mogadishu last week. The UN, US and AMISOM with Somali officials are saying Al-Shabaab Militants, which was driven from Mogadishu in 2011, is making a comeback tactics to hit and run proxy war.