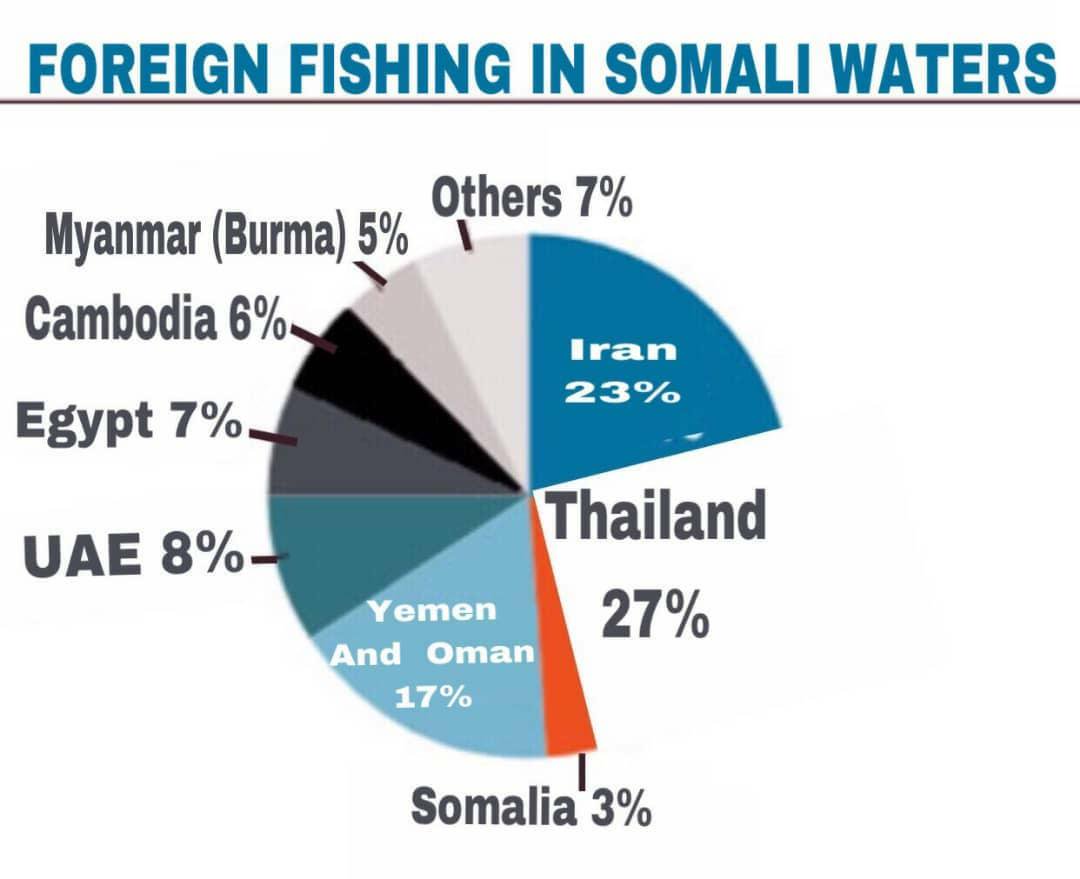 According to the Geeska Africa Online reporter in Bosaso, Puntland “The decline in piracy has been partly attributed to an improvement of patrol efforts off the Somali coast, the establishment of Hir-shabeele and Galmudug regional states and the technical support by the European Union Naval Force, which manages the anti-piracy efforts in the Horn of Africa regions of Somalia.”

In 2009 Time magazine article highlighted “According to another U.N. report, an estimated $300 million worth of seafood is stolen from the country’s coastline each year. “In any context,” says Gustavo Carvalho, a London-based researcher with Global Witness, an environmental NGO, “that is a staggering sum.”

After almost 10 years, things are not getting better, international fleets are in Somalia water, EU Naval Force seems ignoring illegal fishing, evading a wide range of safeguards to undercut the costs of doing business. Blatant violation of catch limits, gear restrictions and safety precautions are frequently carried out by international countries mainly Europeans and Asians , undermining the efforts of responsible fishing of Somalia. The resulting damage to marine resources can lead to smaller catches, slowed recovery of depleted stocks or even collapse for the most vulnerable fisheries.

Pirates,illegal, fishing is often lumped together with unregulated and unreported fishing under the Somali laws, also Somalia prohibits bottom trawling, where the ship drags a fishing nets throughout the seas floor.

Unregulated fishing takes place in Somalia who lacks the resources to establish fisheries laws or monitoring. Some unreported fishing stems from a lack of scientific data collection, while other unreported catches conceal illegal activity. These three dimensions of illegal fishing are a major threat to the Somalia oceans, consumers and seafood businesses around the world.

In a ceremony on December 11, Somali President Mohamed Abdullahi Farmajo announced that his administration has granted 31 fishing licenses to the China Overseas Fisheries Association. “These licenses allow tuna fishing, and this shows that Somalia issues licenses through the corruption process by taking bribes from Chinese companies to fishing without Somali observers according to those insiders in Somali Government said those companies already fishing illegally in Somalia and they have over hundreds Vessels.

For years, Somali fishermen have complained that foreign distant-waters fishing fleets have poached their waters using destructive methods, threatening their livelihood. These challenges are often cited as a causal factor behind the Somali piracy epidemic, which reached its peak in 2011.

According to the Somali fishermen , the new licenses will be affecting migratory tuna stocks, and will affect local fisheries. In addition, the license has no restrictions the waters within 24 nm of the coast for local fishermen.

Many observers have suggested that Somalia lacks the means to police its fisheries, and has not been able to prevent violations of its EEZ rights.

No doubt few will benefits licenses issued, little will see the funds that was allegedly raised in somalia budget, this may also increase piracy and unemployed Somali youth particularly the fisherman see nothing is changed.