The conference was co-hosted by the Swiss Government, the International Committee of the Red Cross (ICRC), the Institute for Peace and Security Studies at the Addis Ababa University (IPSS), and the Geneva Centre for the Democratic Control of Armed Forces (DCAF, sought to identify good practices and cooperation at the national, regional, and international levels on issues related to the regulation and oversight of PMSCs.

Regional organizations including the African Union and representatives from over twenty African countries attended the event. One of the topics of discussion was the Montreux Document, an international document that recalls pertinent legal obligations and good practices for states related to operations of PMSCs during armed conflict was one ofGlobally, private security is expected to grow in to a USD 244 billion industry by 2016 growing at a rate of 7.4% according to a UN report published in November 2013.

PMSCs have also increased their presence on the African continent due to several patterns: the downsizing of militaries and the subsequent large pool of demobilized military personnel, the involvement of companies in training activities as part of security sector reform (SSR) initiatives, the growing presence of international corporate entities and personnel involved in humanitarian aid and development and the general economic trend towards privatization. 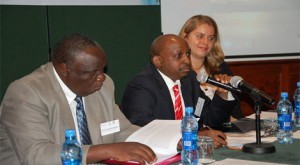 Although still very much at the stage of infancy, the emergence of private security companies in Ethiopia came about following the demobilization of one of the biggest armies in Africa and the change of government in the early 1990s. Currently, there are close to a hundred companies, most of which are medium and smaller in size, yet there has not been any legislation governing their activities and the sector has not been regulated. Some of the leading big companies such as Sebhatu & His Sons, Thrust, Lion, and Agar employ three to nine thousand personnel and are attempting to bring professionalization to the sector.

In the face growing trend of outsourcing of security provision to private actors in the country, the sector is fast growing and has become a multibillion Birr industry, according to estimates from experts and industry actors. In order to fill the absence of a regulatory oversight mechanism, the Ethiopian Federal Police Commission (FPC) has been given the mandate by proclamation No. 720/2011 article 28 to issue licenses and monitor the sector. It however does not command the necessary resources to effective discharge its responsibilities. The first two private companies and the FPC are expected to attend the conference.

“At the African level, the issues of PMSCs are well known and avoided for their clandestine nature and are not given the same level of policy focus and regulatory oversight as other mainstream peace and security issues. We hope this conference and subsequent steps can help facilitate fruitful deliberations and concrete actions at both national and regional levels,” said Kidane Kiros, Director of the IPSS

“The Montreux Document is supported by 53 states and 3 international organisations, including five countries in Africa; Angola, Sierra Leone, South Africa, Uganda and most recently, Madagascar,” said Ms. Alice McGrath-Crégut, Programme Manager of DCAF. “Africa’s growing influence in private security and the loose regulatory frameworks to oversee PMSCs in many countries make our efforts in promoting a broader circle of states and international organisations’ support for the Montreux Document both relevant and timely.”