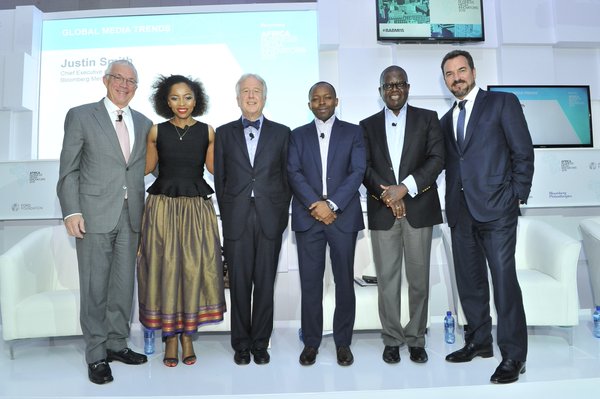 The summit which began on Monday, 9th of November 2015, played host to influencers in the media, technology and business sectors from Ghana, Kenya, Mozambique, Nigeria, Botswana, Ethiopia, South Africa, Tunisia, Uganda, UK, USA, and Zimbabwe, the United States and the United Kingdom.

The event, hosted by the CEO of Bloomberg Media, Justin Smith and Co-founder, Bloomberg News and Editor Emeritus, Matthew Winkler, focuses on the role of business and financial journalism in driving and sustaining economic success on the continent as well as to develop new strategies to improve the future of media success.

Experts have said the continent is experiencing rapid growth despite the collapse of certain currencies (Rand, Naira and Kwacha) in recent times. In an op-ed piece written by Editor-in-Chief Emeritus of Bloomberg News, Matthew Winkler, yesterday, he identified the African continent as having experienced the fastest economic growth in the last ten years, according to data gathered by Bloomberg.

As the fourth estate of the realm, the media is one of the institutions that is able to hold public office workers accountable. In fact, the populace relies on the media for accountability and information. CEO, Editor-in-Chief, Ventures Africa, Uzodinma Iweala mirrored this in his speech at the summit. “Journalism is absolutely essential because of its profound impact on transparency.

Keeping people informed about what the government is doing and keeping governments accountable is an absolute must. This developing space is key in the larger sub-Saharan African socio-political context, and needs more attention as it could drastically improve the quality of the political process and life in general across the continent”.

International collaboration will develop business and financial journalism in Africa

Prior to the summit, an executive survey was conducted and it revealed that continuous collaboration between African and foreign journalists, investment in journalism training, better access to public and private data and growing mobile adoption will greatly improve and drive better business and financial journalism in Africa.

In the same vein, Matthew Winkler believes that when strong business and financial reporting is a regular fixture in the African media space, economic growth, market transparency and investment will become easier to achieve. He is also of the opinion that the summit will give everyone involved the opportunity to share valuable ideas and create constructive dialogue on how to push the growth of business and financial reporting.

Developments in the Twenty-First century have pushed Africa forward into a stronger position on the media plane than it was several decades ago, therefore it is important that all media personalities continuously educate themselves on critical issues. According to the Director of Investments, Omidyar Network, Ory Okolloh from Kenya, this is especially important as Africa evolves within a global context.

“The media’s role in covering Africa’s evolving narrative is at the heart of creating that deeper understanding and the Bloomberg Africa Business Media Innovators forum couldn’t be timelier. Many Africans are beginning to question the African growth narrative and what it means for them – this initiative presents an important opportunity to begin to answer those questions”.