Home Ethiopia The ‘Ethiopia rising’ narrative and the Oromo protests 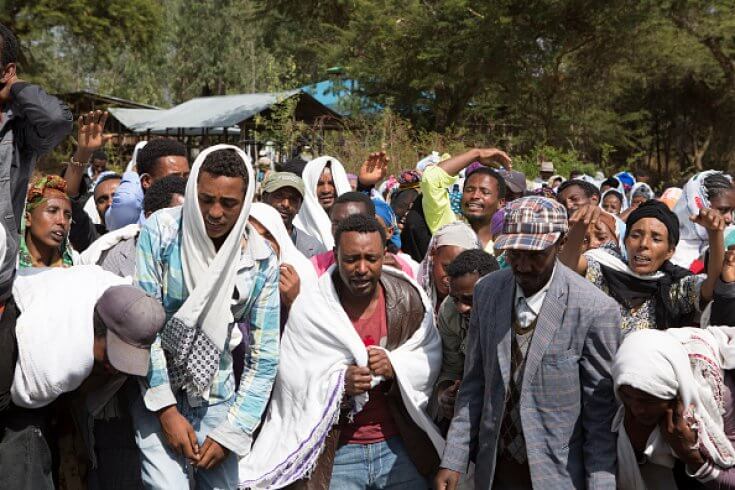 NAIROBI (HAN) June 24.2016. Public Diplomacy & Regional Security News. By Awol Allo. Oromos have been the victims of indiscriminate and disproportionate attacks in the hands of security forces.

Awol K. Allo is a Fellow in Human Rights at the London School of Economics and Political Science.

So much for the “Ethiopia rising” meme which Ethiopian authorities ostentatiously promote to camouflage the repressive nature of the state.

A new report published by Human Rights Watch on the Oromo protests depicts a disturbing picture of a government that thrives on systematic repression and official violence.

The report, which puts the death toll from the seven-month-long protest at more than 400, exposes the “Ethiopia rising” narrative for what it is: a political Ponzi scheme.

Underneath the selective highlighting of Ethiopia’s story of renaissance and transformation lies a Janus-faced reality in which the triumph of some has meant the utter submission of others.

The Oromo protests are exposing the senseless suffering and brutality that lies beneath Ethiopia’s rhetoric of development and revival.

After 25 years of absolute control over the country’s public life, the ruling partyis facing its biggest political challenge yet: an unconventional and innovative resistance to its iron-fisted rule.

What is unfolding in the drama of this increasingly defiant and unprecedented protest is the subplot that producers and cheerleaders of the “Ethiopia rising” myth neither anticipated nor fully understood: the power of the indignant to wreak havoc and paralyse the state even as they were met with murderous official violence.

Though the protest was initially triggered by the threat of displacement by Ethiopia’s development policies – particularly the proposed expansion of the territorial limits of the capital, Addis Ababa, into neighbouring Oromo lands – this is not the sole reason and cannot provide an adequate explanation of the level of defiance on the streets of Oromia.

Rather, the protest is a manifestation of long-simmering ethnic discontent and deeper crisis of representation that pushed Oromos to the margin of the country’s political life.

Despite a rare concession by the authorities to cancel the “master plan”, the protest is still ongoing, demanding genuine political reforms aimed at an equitable reorganisation and overhauling of existing frameworks and arrangements of power in the country.

Protesters argue that the prevailing arrangements with the ethnically mixed morphology of the Ethiopian state, in which ethnic Tigray elites dominate all aspects of public life, are not only undemocratic, they are also an existential threat to the peaceful co-existence of communities in the future.

As the single largest ethnic group in a multi-ethnic country in which ethnicity is the pre-eminent form of political organising and mobilisation, the prevailing arrangement presents a particularly unique and challenging problem for the Oromo.

According to the 2007 Ethiopian National Census, Oromos constitute 34.49 percent of the population while Tigray, the politically dominant ethnic group, represents 6.07 percent of the total population. The real figure for the Oromo people is much higher.

By virtue of being a majority ethnic group, Oromos represent an existential threat to the legitimacy of ethnic Tigrayan rule and therefore have to be policed and controlled to create an appearance of stability and inclusiveness.

In a landmark report titled “Because I am Oromo“, Amnesty International describes a widespread and systematic repression, astonishing in scope and scale, in which the conflagration of ethnic identity and political power gave rise to the unprecedented criminalisation and incarceration of Oromos over the past five years.

Oromos have been the victims of an indiscriminate and disproportionate attack in the hands of security forces. This, protesters argue, had a far deeper and more corrosive effect of rendering Oromo identity and culture invisible and unrecognisable to mainstream perspectives and frameworks.

OPINION: Ethiopia drought – How can we let this happen again?

The government’s response so far has been to dismiss the movement as misinformed, and besmirch it as anti-peace or anti-development elements controlled and directed by external forces – an old tactic used by the government to discredit and criminalise dissent. The most vocal and outspoken members of the movement are being tried for terrorism.

In the decade since 9/11, the West went beyond technical and financial support to providing diplomatic cover to abuses of human rights including by creating make-believe stories that Ethiopia is a democracy and an economic success story.

Ethiopia is a classic case of US counterterrorism policy inadvertently producing the very thing it seeks to prevent: helping to create an Orwellian surveillance state reminiscent of the Stasi in East Germany.

The “Ethiopia rising” narrative and its economic fiction is beginning to unravel. With the IMF significantly downgrading itseconomic forecast to 4.5 percent from 10.2 percent last year, the exodus of people fleeing its repression, and the droughts that made a fifth of its 100 million people dependent on food aid, Ethiopia’s economic miracle is being exposed for what it is: the benefit of the elite.

The Ethiopian government and its partners in the West are thinking that the outcry will die away, that the outrage will pass. We should lose no opportunity to prove them wrong.

Awol K Allo is Fellow in Human Rights at the London School of Economics and Political Science.