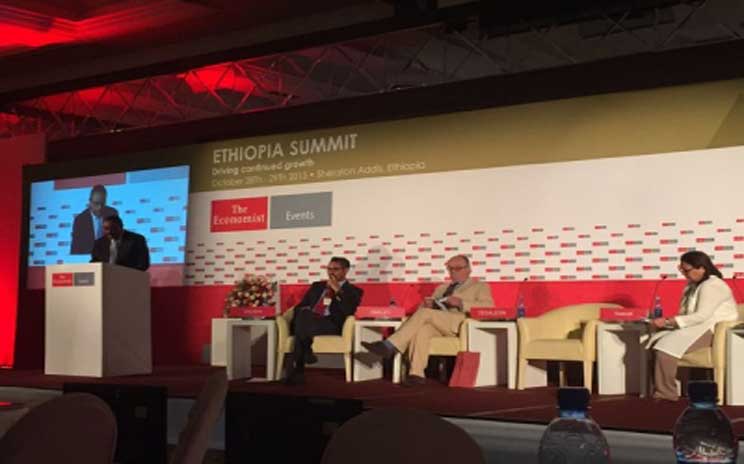 The Prime Minister elaborated about the key elements underlying Ethiopia’s development which includes “the importance of the war on poverty; creation of a carbon-free economy within the next decade on the basis of producing sustainable power; the development of a democratic developmental state and neighborhood policy of robust, sustained and proactive promotion of collective peace and security.” Xan Smiley, Editor at Large of the Economist, passed a message from United Kingdom’s Prime Minister David Cameroon, to Prime Minister Hailemariam and to the attendants, which praises Ethiopia’s achievements in development as well as Ethiopia’s efforts in pacifying and stabilizing the Horn of Africa Region and settling refugees in the region. He said UK commends Ethiopia’s efforts in hosting refugees from Somalia, Eritrea and other regional countries.

He passed the message that UK’s believes Ethiopia will be successful in curbing current challenges related to climate change or vulnerability to weather. Above all he mentioned the message that the UK government is a friend and close partner to Ethiopia.  Dr. Arkebe Oqubay, Minister and Special Economic Advisor to the Prime Minister of Ethiopia, in presented the participants about Ethiopia transition from Growth and Transformation Plan I (GTP I) to GTP II. While presenting development policies and Key strategies of implementation, he said though agriculture will stay a major driver of the economy, Ethiopia is fast shifting its focus to the manufacturing sector. He said among the key strategies to make Ethiopia a manufacturing hub in GTP II includes, directing investment towards manufacturing, establishing industrial parks, improving the quality of infrastructure and increasing the competitiveness of skills. The Economists “Ethiopia Summit’ will continue with various panels and other deliberations and sessions in the afternoon and tomorrow as well. MFA