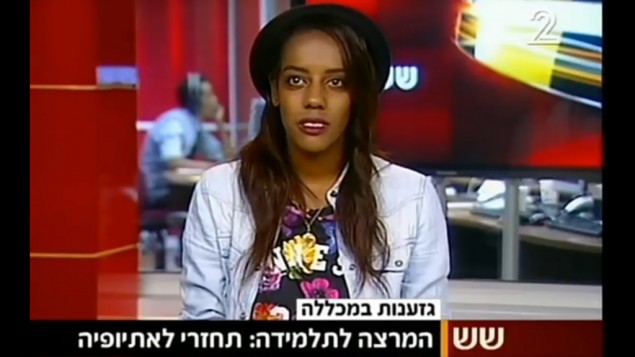 Tel Aviv (HAN) May 6,2015 Public Diplomacy,Regional Humanitarian Security News College Peer Tafnit Holon suspended a lecturer Tuesday after a video surfaced of the teacher arguing with Ethiopian students, telling them, “You forget where you came from. Go back to Ethiopia.”

The argument began Monday during a class discussion on the violent Rabin Square protest that took place in Tel Aviv the day before, in which Ethiopian-Israelis rallied against police brutality and institutionalized racism. One of the students, Osnat Terunech, whose parents moved to Israel from Ethiopia, had taken part in the demonstration.

“The Ethiopians are taking over the country,” said Aviva, the female lecturer whose last name has been withheld.

Terunech responded to the lecturer, chastising her for voicing her political opinions in a classroom setting. “You’re supposed to keep your opinions to yourself,” she continued. “You are representing an organization.”

“No one will shut my mouth,” the teacher replied. “You know what? It’s time you all shut your mouths.”

“What do you mean by ‘you all’?” Terunech asked.

“The Ethiopians!” the teacher yelled back.

After she finally did leave the room, the lecturer addressed the rest of the class. “How insolent they are!” she said. “A few years ago they would never have dared to open their mouths.

“They don’t understand one thing: They’re different from us. And they need to accept that,” the teacher told the class.

A different student responded, “Not one of them is different from us. They’re Jews just like us.”

Another added, “It is sheer racism to say a thing like that.”

According to Terunech, shortly afterward the rest of the students left the class in protest.

Terunech responded to the video Tuesday, telling Channel 2 news, “It’s the first time in my life [I’ve experienced something like this].”

“How can it be that someone who is supposed to teach me, to give me an education, can say such words?” she continued.

The teacher, Aviva, also responded to the event, defending her position. “What did I say?” she asked incredulously. “Whoever doesn’t like it here, doesn’t have to stay; that’s all I said.”

“[Terunech] cursed me, the government, the police, the college. She started screaming like a crazy person,” Aviva said. “She thought she was still at a demonstration in Rabin Square.”

This cursing does not appear in the video, and Terunech denied it outright. “I’m shocked by the lies,” Terunech said. “I’m shocked.”

The college responded to the incident in a statement, saying, “The teacher has been suspended and has been called to a hearing in order to hear her side of the event.” timesofisrael