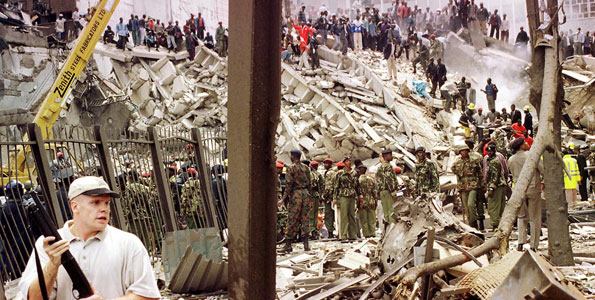 NAIROBI (HAN) November 10, 2015. Public Diplomacy & regional Security. No Tanzanians or Kenyans are among the 68 persons included in a $2.4 billion lawsuit filed in Washington on Wednesday against a French bank alleged to have helped finance the 1998 embassy bombings.

The US law under which the suit was initiated permits only US citizens to seek compensation for damages resulting from the actions of a private company, the lead attorney in the case said.

The filing by Washington attorney Thomas Fortune Fay targets Paris-based BNP Paribas and several of its subsidiaries. It alleges that the giant French bank “knowingly and intentionally” provided al Qaeda and Hezbollah with “money, material support and resources” that enabled the terrorist groups to plan and execute the bombings.

The 68 Americans named in the suit were either directly affected by the attacks in Nairobi and Dar es Salaam or are related to victims. A total of 224 individuals died in the twin blasts — 200 Kenyans, 10 Tanzanians, 12 US nationals and two suicide bombers.

Referring to Kenyan and Tanzanian citizens killed or wounded in the attacks, Mr Fay said, “We were unable to bring those people in because the source of the suit is the Anti-Terrorism Act,” he said. That law cannot be applied even to employees of the US government if they are citizens of another country, Mr Fay noted. Kenyans and Tanzanians who worked in the US embassies are thus not eligible for compensation under this law.

Nine Tanzanians were included in an earlier US court action initiated by Mr Fay that resulted in a $957 million judgment against the governments of Iran and Sudan. That ruling in 2014, which also covered 14 US nationals, has been appealed to the US Supreme Court. Mr Fay said the highest US court may hear arguments in that case sometime next year.

A different law, the Foreign Sovereign Immunities Act (FSIA), formed the basis for the suit against Sudan and Iran, which were found to have abetted the embassy bombings. The FSIA allows legal action to be taken on behalf of US citizens, as well as members of the US armed forces regardless of their nationality, and individuals of any country employed by or acting on behalf of the US government.

BNP Paribas paid a $9 billion fine to the US government in 2014 for helping its clients dodge US sanctions against Sudan, Iran and other countries. Citing that precedent, Mr Fay said “the prospects are excellent” for the new suit to result in a ruling against BNP Paribas.