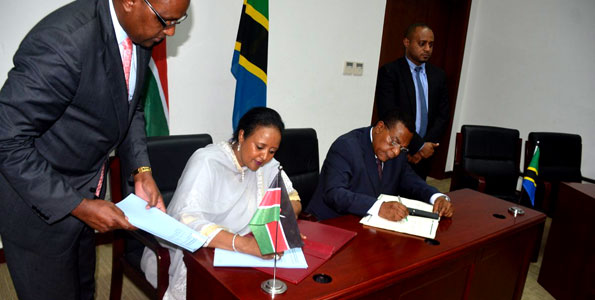 Tanzania will back Kenya’s Amina Mohamed for the African Union Commission chair.

The country’s Foreign Affairs minister Augustine Mahiga said this during a joint press conference in Dar es Salaam with his Kenyan counterpart on Friday.

“I would also like to assure you that Tanzania is fully behind you,” Mr Mahiga said to Ms Mohamed.

On her part, Ms Mohamed said “it was tough to reach this decision to contest but I’m prepared for the challenges ahead,” adding, “I feel very strongly that this is our time and I am upbeat about our chances to realise our dream.”

Earlier, Tanzania had said that though it did support Ms Mohamed for the position, who has been endorsed by East Africa Community and Common Market for Eastern and Southern Africa economic blocs, positions may shift after the first round of voting in elections scheduled for late January when countries start horse-trading.

The Kenyan Foreign Affairs Cabinet Secretary was in the Dar for the third session of the Joint Commission for Cooperation (JCC). JCC is a diplomacy body that was formed to direct bilateral relations between the two countries.