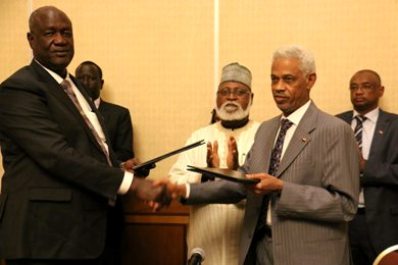 JUBA (HAN) November 10, 2015. Public Diplomacy & regional Security. The joint political and security committee between Sudan and South Sudan headed by the minister of defence in the two countries will meet in the next Monday in the Ethiopian capital Addis Ababa. The members of the two delegations will discuss the implementation of the recommendations of the last extraordinary meeting between the two sides in last September.

The semi-official Sudanese media Center (SMC) Monday has reported that the meeting will discuss the activation of the implementation mechanisms according to the security arrangements agreement between Sudan and South Sudan, in addition to discuss the establishment of the demilitarized border zone between the two countries.

According to a statement by the African Union High Level Implementation Panel (AUHIP) which brokers the process, the 16 November meeting was supposed to discuss a report by UNFISA force commander and to take place in Khartoum. Juba and Khartoum on 27 September 2012, signed the cooperation agreement to end the tension erupted between the two countries since the separation of South Sudan in July 2011.