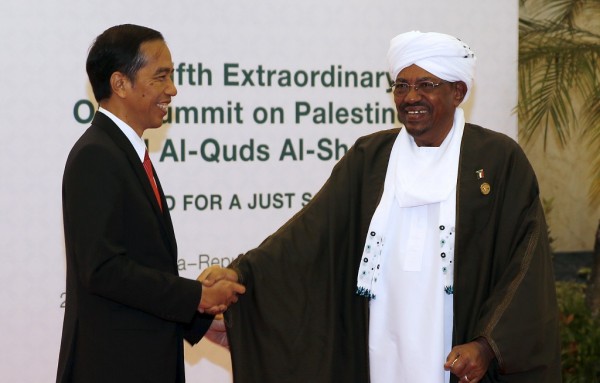 The Hague-based International Criminal Court (ICC) issued arrest warrants for Bashir in 2009 and 2010, accusing him of masterminding genocide and other atrocities in his campaign to crush a revolt in the western Darfur region.

Members of the ICC are obliged to act on arrest warrants. Indonesia is not a member.

Last year, Bashir cancelled a trip to Indonesia for a summit at the last minute. His plan to attend an Asia-African leaders conference in Jakarta in April sparked protests among rights groups who wanted the president to be arrested.

Bashir, who has ruled Sudan since a 1989 Islamist and army-backed coup, rejects the ICC’s authority. But he had not travelled outside the Middle East or Africa since 2011, until he visited China in September to attend celebrations commemorating the end of World War Two. China is also not a member of the ICC.

In June, Bashir was forced to flee South Africa after a court ruled he should be banned from leaving pending the outcome of a hearing on his possible arrest.