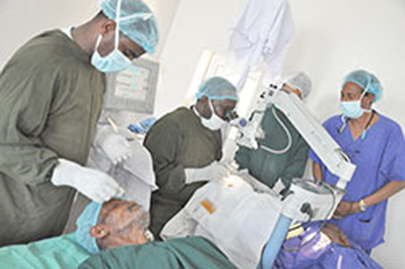 The Eritrean state-run television(ERITV) said the delegation of Sudanese Ophthalmologists conducted eye surgeries to over 400 patients.

Dr. Isam Segid, the head of the Sudanese medical team indicated that, alongside the surgery, they also conducted ophthalmological diagnosis for more than 1000 Eritreans who had long been suffering with sight disabilities.

The team provided medicines and eyeglasses to the patients they operated.

Earlier this month, the Sudanese team of Ophthalmologists similarly conducted eye surgeries to residents in the Eritrean capital, Asmara who had eye health problems.

Every year, the Ophthalmologists medical group conducts eye surgeries in different regions of the nation. The program was conducted in accordance with an agreement reached between health ministries from the two countries.

Such collaboration, doctors say, has significant importance in exchanging experiences and best practices between the two sides.

Over two-thirds of Eritrea’s estimated 4 million populations’ whose majority residing in rural areas live below the national poverty line while a third of the total live in extreme poverty.

The World Bank’s global data estimated that in 2004, there were only 50 physicians per 100,000 people in Eritrea while the World Health Organization (WHO) estimated only three.

The two-year long war over border disputes with Ethiopia which ended in 2000, greatly affected the health sector of a nation, which gained independence from Ethiopia in 1993.