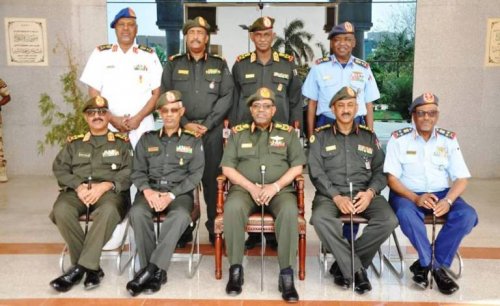 January 30, 2019 (KHARTOUM) – The Sudan Armed Forces (SAF) on Wednesday has announced its support to President Omer al-Bashir saying it wouldn’t hand over the country to the “homeless”.

On Wednesday, Sudan’s Defence Minister, Awad Ibn Ouf, and SAF’s Chief of General Staff Kamal Abdel-Marouf have briefed army officers in the ranks of Brigadier General and Colonel on the situation in the country.

During the meeting, Abdel-Marouf stressed the SAF wouldn’t allow the country to collapse or slip into the unknown, saying those leading the protests are the same persons who remained hostile to Sudan and sought to distort its world image.

He vowed to prosecute those who offended the SAF, saying the army wouldn’t hand over the country to the “homeless” leaders of the rebellion or agents of the suspicious foreign organizations.

For his part, the Defence Minister said the SAF is fully aware of the scenarios and plans to exploit the hard economic conditions and destabilize the security.

He pointed out that some parties sought to provoke the SAF in order to drag it to take an illogical action that doesn’t conform to its history and status in the country.

Ibn Ouf added the temporary crisis has shown the true stance of the SAF, stressing the army would neither compromise the security of the country nor its leadership.

Large segments of the Sudanese society have called on the SAF to take the side of the people and interfere to seize the power as it has done during the October revolution of 1964 and the April uprising of 1985.

However, many intellectuals doubted that SAF would take similar action as it did in 1964 and 1985 saying the army is no longer a neutral institution.

They pointed out that the regime of President Omer al-Bashir has carried out deep structural changes in the army during the past three decades dismissing thousands of officers and replacing them with Islamists loyal to the regime.