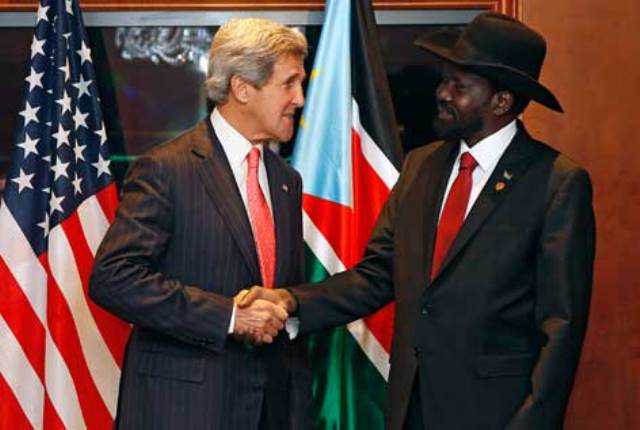 Khartoum (HAN) April 26, 2014 – By LARA JAKES (AP) . The United States  Secretary of State John Kerry will renew his threat of sanctions against Sudan’s militants in a visit next week to South Sudan, where ethnic killings are ripping apart the 3-year-old nation and all but scuttling peace talks.

John Kerry’s in South  Sudan  visit will come against the backdrop of last week’s massacre of several hundred civilians in the northern city of Bentiu by rebel fighters. On Friday, the government in Juba released four politicians who had been charged with treason in a negotiation attempt with rebels to set conditions for peace.

State Department spokeswoman Jen Psaki said the release “should have happened long ago” but still welcomed it. She said the U.S. is still considering sanctions against militants who threaten South Sudan’s security and stability, have targeted U.N. peacekeepers or are otherwise responsible for human rights abuses.

“We continue to be shocked and horrified by the violence on the ground,” Psaki told reporters in Washington. “The level of violence and the horrific massacres that we’re seeing have led us to this point.”

The U.N. Security Council also is considering sanctions if attacks on civilians continue, and top U.N. officials will be in South Sudan this weekend to investigate the brutalities and reported use of radio to disseminate hate speech.

South Sudan became the world’s newest country in 2011 when it cleaved off from Sudan after a referendum. Enmities between ethnic groups have been longstanding.

Kerry told reporters on Thursday that he plans to stop in South Sudan as part of a four-nation trip to sub-Saharan Africa. The State Department did not provide additional details, and usually does not disclose travels to high-threat conflict zones ahead of time for security reasons.

U.S. sanctions could be imposed on people on both sides of South Sudan’s conflict, and they have been threatened for nearly a month. House Foreign Affairs Chairman Ed Royce, R-Calif., urged the Obama administration on Friday to impose the sanctions and try to stanch the violence as quickly as possible.

“I see no reason to wait,” Royce wrote in a letter to President Barack Obama.

On the Africa trip, Kerry also will travel to Ethiopia, the Democratic Republic of Congo and Angola. The State Department this week issued a new warning about the risks of traveling to the DRC, noting that armed groups in the country’s east are known to target civilians in kidnappings, rapes, killings, and car hijackings.

While he will highlight efforts to improve trade, bolster democracy and discuss U.S. investments in programs for AIDS relief, Kerry inevitably will focus on the region’s security.

In the Ethiopian capital of Addis Ababa, Kerry will attend a fourth round of high-level talks between the U.S. and the African Union, which has deployed peacekeepers to Somalia. He also discuss efforts to defeat or neutralize armed groups in the Congo and push for stability in Angola.