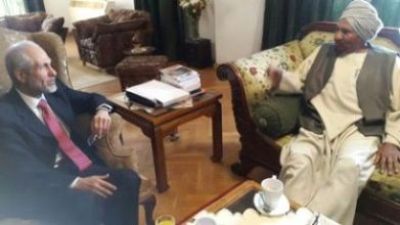 According to a brief press release issued Wednesday, the two opposition leaders said they discussed the political developments at the national and international levels. Al-Mahdi and Attabani also called for the unification of the opposition forces with a view to achieving equitable and comprehensive peace and complete democratic transition in the country.

The press release has, however, did not provide any details about the outcome of the meeting other than confirming that the two men’s viewpoints were identical on all the issues discussed. Sources close to the meeting told Sudan Tribune, they believe that the meeting discussed the unification of the opposition groups around a “minimum agreement” deal on the democratic reforms.

The sources also expected the two leaders to have exchanged views on the national dialogue preparatory meeting that the African Union High-Level Implementation Panel (AUHIP) plans to hold this month, the complications surrounding its convening and chances of its success. In the meantime, the RNM deputy chairman Hassan Osman Riziq has stated that their movement received a proposal from the (AUHIP) to participate in the Addis Ababa meeting .

According the proposal, he said, will also participate in the meeting : the armed groups, the leader of the NUP leader Sadiq al-Mahdi, and the National Alliance for Change (NAC), known by its Arabic acronym GOOT. However Riziq stressed in his statements to Sudan Tribune that the RNM did not yet receive an invitation from the AUHIP for the pre-dialogue meeting, but just had received a proposal in late December to participate in the meeting.

He did not specify the nature of that participation , whether as a member, an observer or something else. He said they suggested to the AUHIP to amend its proposal because in that way it would exclude some political groups from the meeting which should be an inclusive one.

He added that the African mediation team did not reply to their comments, saying that it was possible that their party might accept the AUHIP proposal as it is and make some concessions “in order not to lead the meeting into failure”. The ruling National Congress Party and political forces participating in the national dialogue mechanism voiced their objection to the participation of the opposition parties in the Addis meeting.

They mention in particular, the RNM and NAC that accept the dialogue in principle, but call to implement a number of confidence building measures like the release of political detainees, freedoms as provided in a roadmap proposed by the African Union. Conflicting reports emerged about the pre-dialogue meeting which the AUHIP intend to hold this month between the government and opposition groups.

While some opposition groups said they are invited to the meeting saying it would be held on 15 January, others denied being convoyed for such meeting. DUP leader explained last week to a number of journalists through Skype that the AUHIP proposed two tracks for the pre-dialogue meeting: one inside the South with the opposition political forces, and another in Addis Ababa for the armed groups.

He pointed that he is inclined to accept the first option in order to hold an inclusive meeting under the auspice of the African mediators. The ruling party explains its opposition to the participation of the political opposition groups in a meeting outside Sudan saying they can join the internal process and express themselves freely.